Despite snowy conditions, Penn State’s School of Visual Arts held a reception and exhibition of its “Signed, Steeled, Delivered” project Tuesday in and around the Visual Arts Building. Fourteen Penn State students enrolled in Art 330: Metal Fabrication and Mixed Media created the pieces, which explore how usually nonmalleable steel can be manipulated and interpreted.

“It’s kind of our end project,” Art 330 student Adelaine Muth said. Muth titled her piece “Counterbalance,” and described it as a search for unity amongst conflicting tensions.

“It’s good practice if you want to get into the realm of public art,” she said. “Since they’re outside, you have to worry, ‘Is this going to poke someone’s eye out?'”

At time of publishing, the artwork hadn’t poked any eyes out, and will be on display until April 24. Most of the pieces can be found around the Visual Arts Building on Curtin Road. The rest are placed in North Campus, with a few scattered near the library and Old Main. 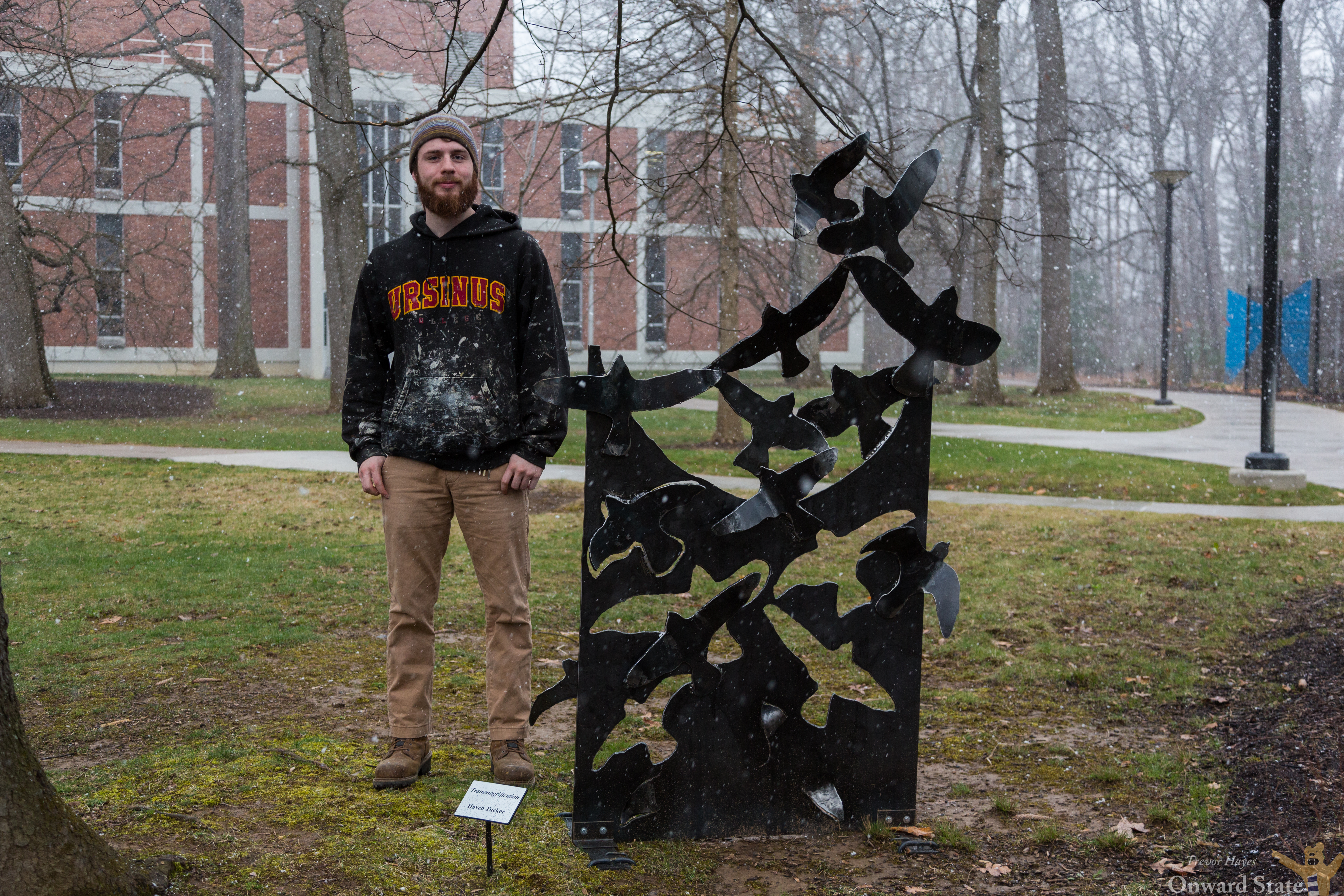 This piece by Haven Tucker is titled “Transmogrification,” which is an actual word defined as the process of transforming in a surprising or magical manner. It’s reminiscent of the cutouts in the woods near the Pasquerilla Spiritual Center, but this piece is more calming and bolsters the viewer’s vocabulary. Tuesday’s wintry mix may have made it difficult for those birds to take flight, but their steel wings should be useful in blustery conditions. 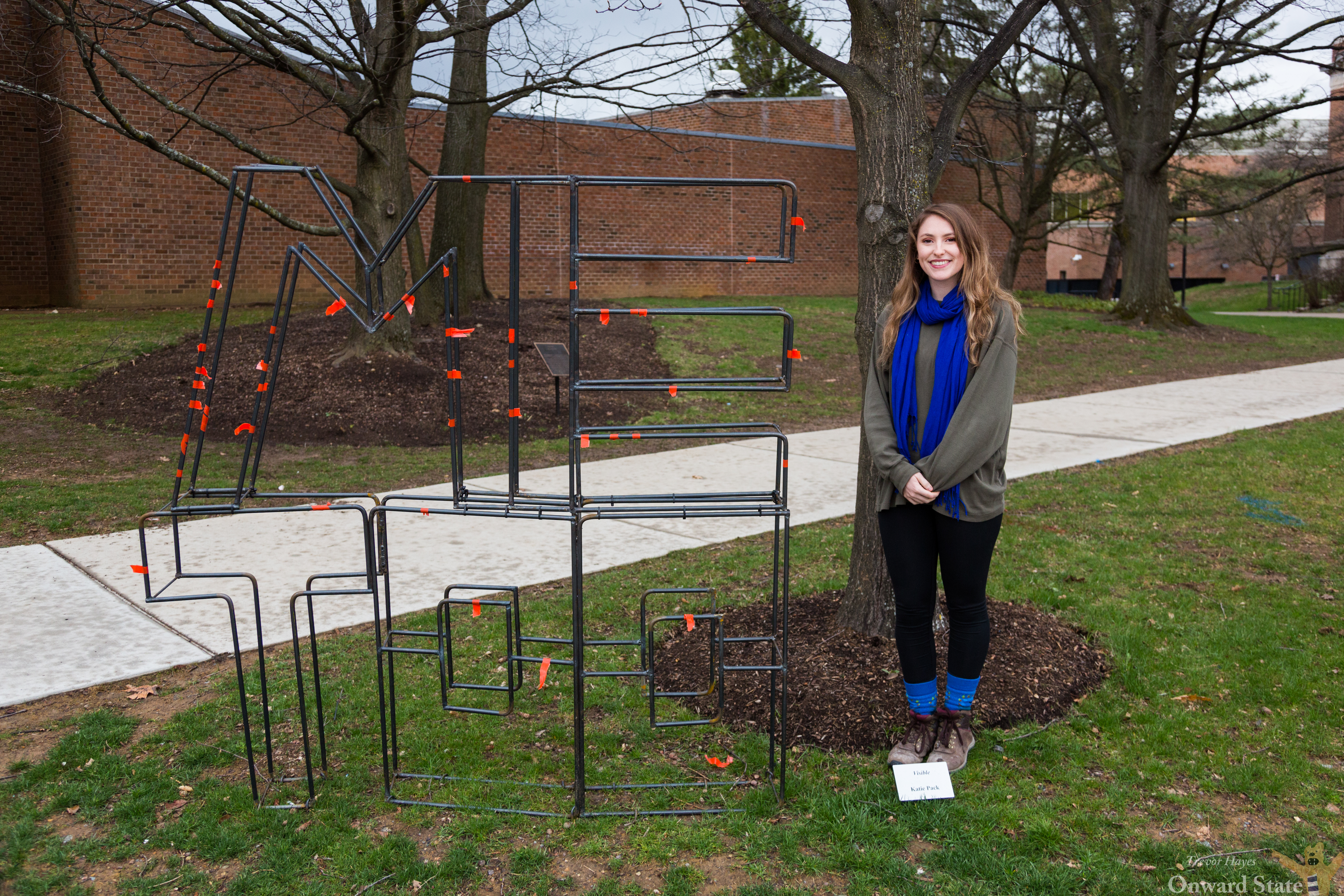 Katie Pack created this piece, which she titled “Visible.” “My piece stands in solidarity of survivors and to the University Administration that this problem still needs to be addressed,” Pack said. The red fabric strips hanging from her piece are symbols, and survivors of sexual violence can attach their own to the structure. As the exhibition continues and more people attach their own strips, the piece will become harder to ignore as it grows brighter. 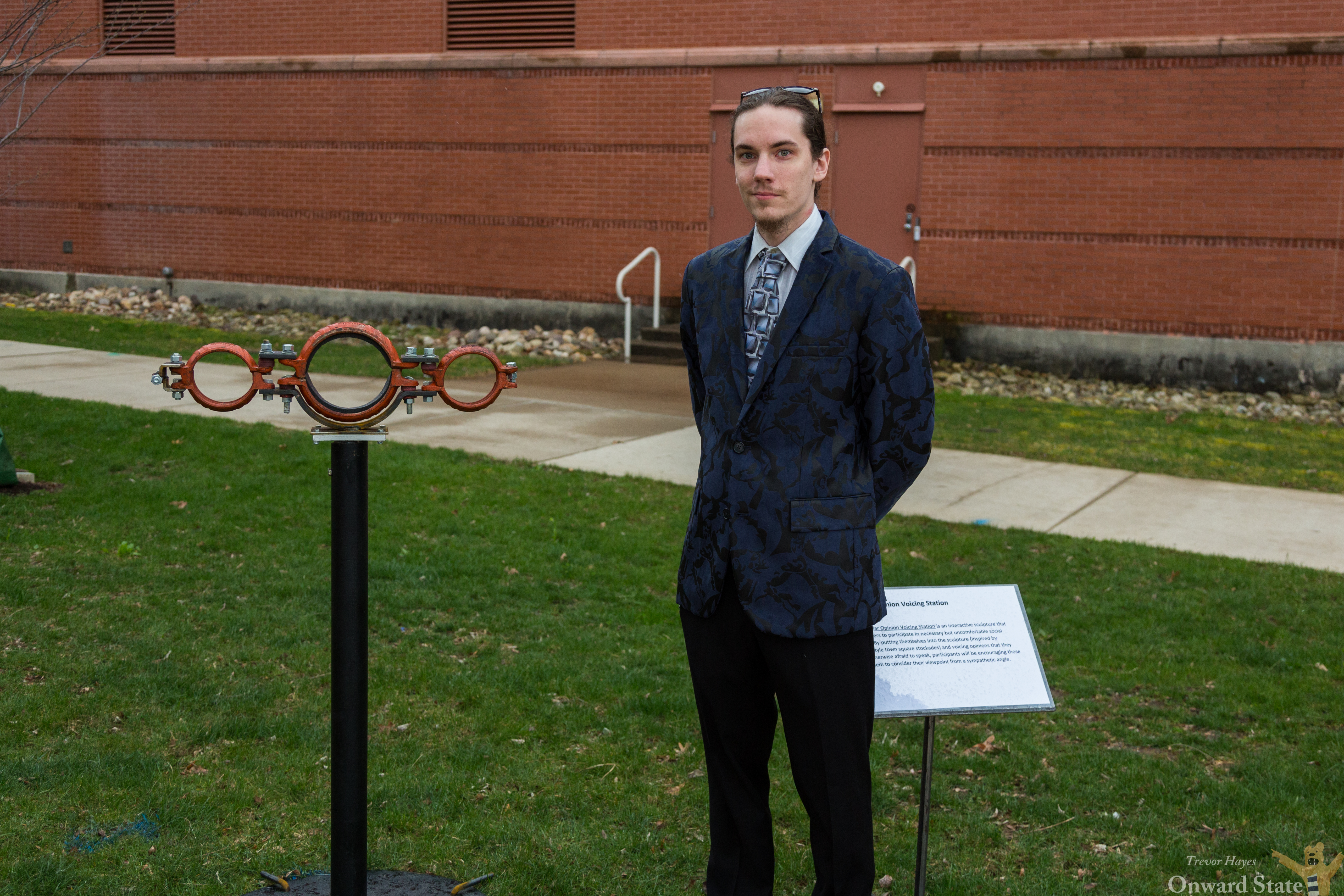 “It’s an unpopular opinion station styled after medieval stockades, allowing people to say things they think won’t go over well,” Horton said. He wrote in his description of the piece that he hopes the stockade will let observers see the locked-up person in a sympathetic light and listen to their opinion more even-handedly.

We weren’t able to speak directly with every artist featured in “Signed, Steeled, Delivered.” Fortunately, each wrote down a few thoughts about their piece for the event pamphlet. Several are featured here.

“Rock, paper, scissors: shoot. Resist. Hands up! Peace. Pow. These gestures hold connotations simultaneously, and like everything that humans do with their hands, these signs are loaded. What do a children’s rhyme and radial political movements have in common? How is this subversive relabeling of preexisting signals a political act? This piece is a wake-up call, and a call to arms. We are in the midst of a world in which guns and student resistance have become commonplace in the educational setting. Complacency is not an option.” 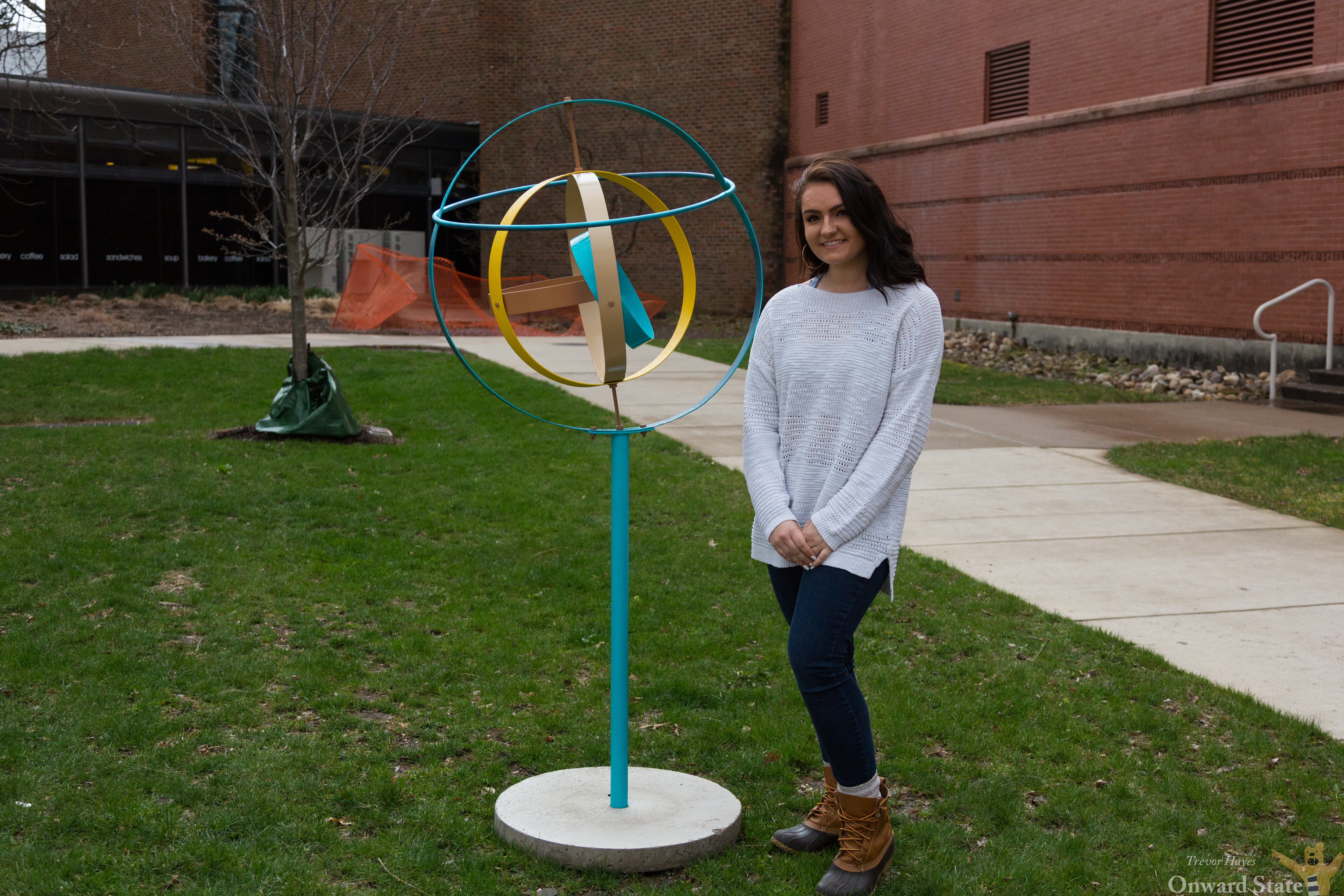 “Surrounded was inspired by the idea of humans being surrounded by important things that they often pay no attention to. The thoughts, emotions, and situations that surround people throughout their everyday lives tend to be overlooked due to a busy schedule or lack of interest. My hope is that this piece will force viewers to question what surrounds them daily, and help them to become more conscious and free from their thoughts and surroundings.” 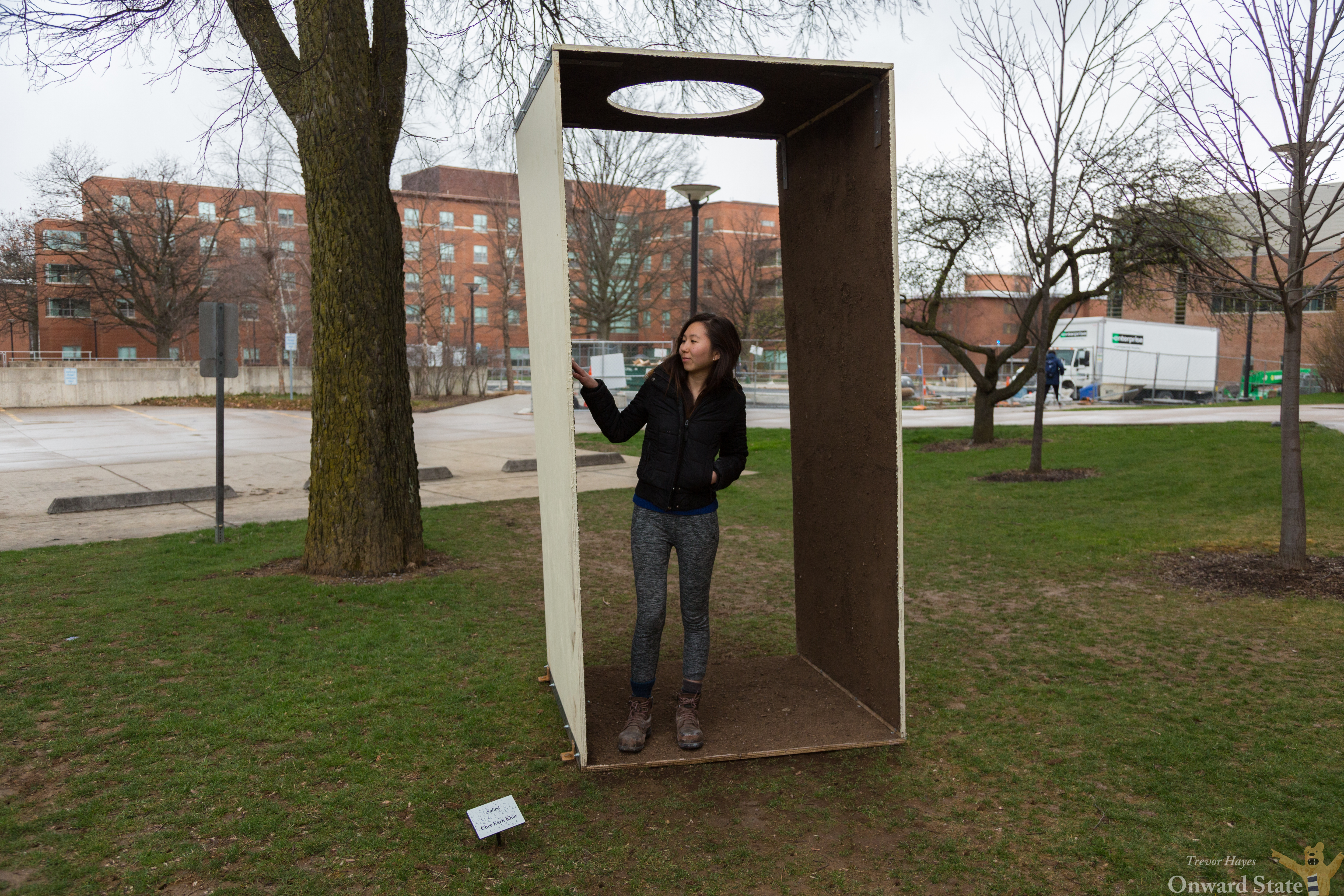 About twice as many artists are displaying their work in the exhibit than are featured here, and their pieces can be found throughout campus.

Share via
Penn State Student Artists Steel The Show Around Campus
https://onwardstate.com/2018/04/18/penn-state-student-artists-steel-show-around-campus/
Follow @onwardstate
Send this to a friend