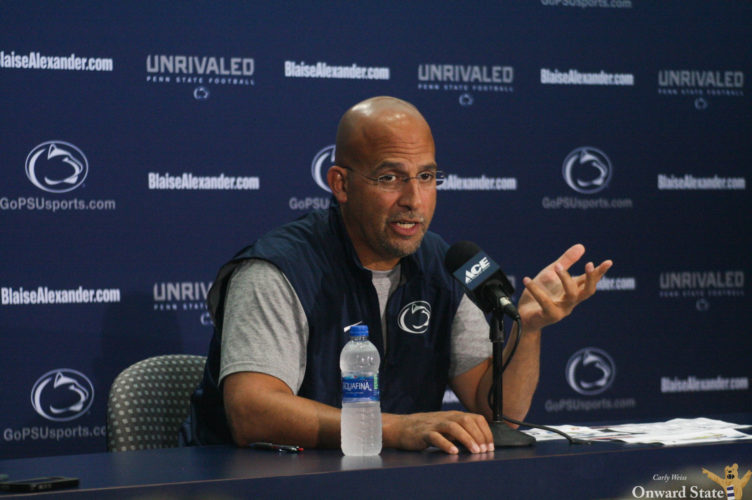 Penn State football head coach James Franklin addressed the media ahead of the start of his team’s spring football practices on Wednesday afternoon.

Franklin talked about a little bit of everything at his press conference, including his expectations for spring ball, the NCAA’s transfer portal situation, and the health of current No. 1 quarterback Tommy Stevens.

The head coach reiterated Tommy Stevens underwent surgery on a “fairly significant injury” in the offseason, and that procedure will hold him back a bit to start spring practice.

Franklin was fairly mum on the quarterback’s status, but Stevens may be “full go” by the end of spring practice depending on how his recovery progresses.

“He will be able to participate,” he said. “I don’t know if it’s going to be full go. At this point, he’ll be limited from the beginning of spring.”

Quarterback is obviously a key position when it comes to leadership, and it’s safe to say the departure of Trace McSorley leaves a big void to fill as far as that’s concerned. However, Franklin isn’t too concerned about a lack of leadership in his team due to the amount of experience Stevens and current backup Sean Clifford have gained over the past few seasons.

“Having guys like Stevens and Clifford, it’s always going to start with your quarterback position,” he said. “Those two guys have played a lot of football and been apart of the program, and they understand the expectations and the standards.”

Franklin also discussed his expectations for the spring, but he didn’t go into what he expects once the regular season rolls around too much.

“Confidence and chemistry are a huge deal for us,” he said. “We’re going to work very hard at offensive ball security and defensive ball disruption — we played really good defensive football around here the past couple years. I think it’d really help us if we could do a great job creating turnovers.”

The head coach hopes his team’s increased emphasis on forcing fumbles and other turnovers will help the offense improve when it comes to ball security. If the defense emphasizes generating turnovers in practice, the offense will have to work even harder to keep hold of the rock.

Penn State’s players will also work on understanding why the team runs certain plays, and they’ll also focus on situational football, including two- and four-minute drills. A lot was made of the Nittany Lions’ handling of certain late-game situations last season, so it’ll be interesting to see how the team’s development in that area translates to game action in the fall.

Franklin also stated the obvious: His team won’t be the most experienced one out there when the 2019 season begins.

“We’re obviously young,” he said. “We have a lot of question marks with some of the guys we lost, but I also think there’s a lot of excitement.”

Franklin’s first news announcement of the press conference surrounded redshirt sophomore wideout Mac Hippenhammer. Hippenhammer split his time between spring football and his role on the baseball team, but the head coach announced he’ll focus on baseball entirely this time around.

“[Baseball] was always a part of the conversation in the recruiting process,” Franklin said. “It’s hard to just be a Penn State student alone, and then trying to play baseball and football and do school at the same time is very challenging. We’ve had a lot of conversations with [baseball head coach Rob] Cooper. He’s Bo Jackson for us.”

Hippenhammer hauled in six passes for 103 yards and a touchdown last season, but it seems like he’s sticking with America’s pastime for the time being.

In addition to the wideout, Franklin announced that Juice Scruggs will not participate in spring practice due to injuries suffered in a car accident. He didn’t provide any more details on the offensive tackle.

In his opening statement, Franklin confirmed a host of position changes that’ll take effect this spring.

Lineman CJ Thorpe made the transition from offensive line to defensive line at one point last season and finished the season on the D-line. He’ll go back to the offensive side of the ball to start spring practice — Franklin cited his high ceiling on offense as the main reason for the change.

“He did an unbelievable job for us — we had a need for size and veteran experience on the defensive line,” he said. “We really believe that CJ has an unbelievable ceiling when it comes to being an offensive lineman. He gained some maturity [on defense].”

Additionally, former quarterback Grayson Kline will make the transition to tight end this spring to add depth there, according to Franklin. At 6’5″, Kline definitely has the height to play the position, but he’ll need to build on his 219-pound frame in order to truly make an impact there.

On paper, Penn State will return five offensive starters and six starters on the opposite side of the ball. However, these numbers come with a bit of an asterisk in Franklin’s mind.

“These guys have played a lot of football for us. We have other guys who we’d consider starters that don’t necessarily meet the data to be called starters,” Franklin said.

Parsons obviously had a huge freshman year playing in an unfamiliar position, but he was only in the starting lineup once last season. Elsewhere, Castro-Fields was usually the first cornerback off the bench while Amani Oruwariye and John Reid started. Dotson wasn’t a regular fixture in the lineup until late in the season, but he got lots of valuable experience out wide for the Nittany Lions.

On The Transfer Portal

Franklin made his opinion on the transfer portal abundantly clear at his most recent press conference before today. To summarize, he thinks the NCAA “over-corrected” the process of student-athletes changing teams. In Franklin’s opinion, there was too much transfer prevention from coaches before, and coaches can’t really block their players from leaving now.

The head coach didn’t air his grievances about the portal any more today. Instead, he discussed how he’s “leaned on” other coaches for advice about how they’re handling the new system.

Additionally, Franklin wanted input from his players about the transfer portal after his program lost more players than any other this offseason.

“I wanted to hear [the leadership council’s] perspective, how our players saw it. I think coaches understand the need for it, but also maybe have a different perspective,” he said. “I think it’s also great to have them understand an administrator or coach’s perspective on how to manage the roster.”

His main takeaway from those discussions: Every program has a different method of dealing with the transfer portal. This is a concerning prospect for Franklin, but he also knows how much progress Penn State has made in terms of familiarizing itself with the portal.

“I think we’re in a good place. We’ve learned a lot about it, like a lot of people across the country have,” he said. “[Other coaches’ perspectives] are as wide-ranged as you can possibly imagine in how different programs are dealing with it. But once again, it’s where we’re at, and you’d better embrace it and move forward.”

Hearing James Franklin refer to the Nittany Lions as his kids is definitely not unusual, and he did that again in his opening statement. However, Franklin added a new wrinkle to that on Wednesday.

“As you know, I’ve got 120 18-to-22-year old males, plus two daughters. They’re getting older every single day,” he said. “We went bowling, and my daughter took her ponytails out and got her hair straightened and blown out. It scared the hell out of me, to be honest with you. I’ve got 122 kids that I’m responsible for, and I’m very proud of what they are all doing.”

In case you were curious about the head coach’s highest-ever bowling score (because who isn’t?), it’s 186. Franklin swears he achieved that without the help of bumpers, and I’m willing to take his word for it.

Share via
James Franklin\'s Early Outlook For The 2019 Season
https://onwardstate.com/2019/03/13/james-franklins-early-outlook-for-the-2019-season/
Follow @onwardstate
Send this to a friend