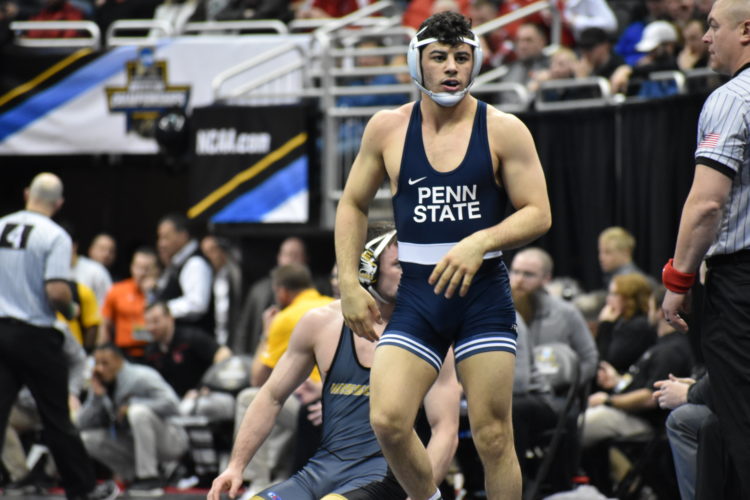 After a few hiccups on Thursday night, Penn State wrestling returned to full strength on Day Three of the NCAA Championships, going 6-0 in the quarterfinals and 10-2 overall. The team is guaranteed to finish with at least six All-Americans and has seven wrestlers still in contention.

The Nittany Lions lost their lead early in the session, falling as many as 7.5 points behind Ohio State, but a dominant run allowed them to pull back well ahead of the field. At the end of the quarterfinals, Penn State sits in first place with 80 points, ahead of Ohio State (66.5), Oklahoma State (56), and Iowa (43.5) in what’s shaping up to be a wash of a team race.

After falling to No. 7 Austin DeSanto on Thursday night, No. 10 Roman Bravo-Young kicked off Day Two for the Nittany Lions. He got a tough draw in the consolation bracket, matching up with No. 9 Chas Tucker of Cornell. After falling behind 1-0 in the second period due to a penalty, Bravo-Young took control of the bout with an escape and takedown. Bravo-Young tacked on another takedown and a riding point en route to a 6-3 win and to stay alive in the tournament.

No. 3 Nick Lee met No. 22 Max Murin of Iowa in the quarterfinals of the 141-lb. bracket. The two were tied 1-1 entering the final minute of the bout, but Lee registered a clutch takedown with 50 seconds to go and rode out Murin for the remainder of the match for the 4-1 decision. Lee’s win clinched him All-American status for the second time in his career.

No. 12 Brady Berge advanced in the consolation bracket with a 5-2 win over No. 27 Tejon Anthony of George Mason.

No. 1 Jason Nolf picked up right where he left off on Thursday night in the 157-lb. quarters. He picked up a 23-6 technical fall after taking No. 9 Christian Pagdilao of Arizona State down seven times.

With less than a minute to wrestle, Nolf needed a pair of takedowns in order to secure a technical fall. And in true Jason Nolf fashion, he got that and more, adding on a pair of near-fall points to blow the gap even more open.

No. 2 Vincenzo Joseph faced a familiar foe in the 165-lbs. quarterfinals: No. 7 Isaiah White of Nebraska. The two were rivals in high school, but Joseph has held the upper hand in their college meetings. He beat White in sudden victory last year in the NCAA Championships and 2-0 during their regular season meeting.

It was more of the same in the quarters on Thursday. Joseph pulled out another sudden victory decision against White, winning 3-1 off a takedown. While Joseph was punching his ticket to the semifinals for the third straight year, he got some good news from one mat over. No. 1 Alex Marinelli, who’s beat Joseph twice in the last years, fell to No. 8 Mekhi Lewis of Virginia Tech.

No. 1 Mark Hall became the fourth Nittany Lion to earn a spot in the semifinals when he held off No. 8 Taylor Lujan for a 5-3 decision. Hall broke a 2-2 tie with a reversal midway through the third period and added on a riding time point for the win.

No. 2 Shakur Rasheed advanced through the consolation bracket with a 9-1 major decision against No. 17 Andrew McNally of Kent State. After a third-period meltdown against No. 15 Chip Ness of North Carolina, Rasheed bounced back with a commanding win in which he recorded four takedowns and clocked more than four minutes of riding time.

For the first time during this year’s NCAA Championships, an opponent made it out of the first period against No. 1 Bo Nickal No. 8 Nathan Traxler of Stanford went the distance against Nickal, losing 14-4.

Nickal registered five takedowns in the win. He also came close to recording his third first-period fall of the tournament when he took Traxler to his back with an acrobatic turn. Instead of a fall, though, Nickal came away with two near-fall points.

With their wins, Nickal and Nolf both solidified their standings as four-time All-Americans.

No. 2 Anthony Cassar wrapped up a 6-0 run in the quarterfinals for Penn State against No. 7 Trent Hillger. Cassar won 4-0 after controlling Hillger for the entire seven minutes. A third-period rideout clinched the win for Cassar, who becomes an All-American at his first NCAA Championships.

In the second round of wrestlebacks, Bravo-Young drew No. 15 Ben Thornton of Purdue. During their regular season meeting, Thornton handed Bravo-Young the first loss of his career. During the match, the Penn State freshman suffered a leg injury that sidelined and hampered him for the next few weeks. In the rematch, Bravo-Young made good on his midseason flub and advanced with a gritty 3-1 win. A win tonight will send him to the podium.

At 149 lbs., Berge was eliminated in a heartbreaking sudden victory loss to No. 20 Thomas Thorn of Minnesota. Berge and Thorn were knotted up 2-2 before a wild scramble in the final seconds of sudden victory resulted in a winning takedown by the Golden Gopher.

With the loss, Berge bows out of the tournament, having earned 1.5 points for the Nittany Lions. He finished a strong redshirt season with a 20-5 record.

Rasheed rounded out Session 3 with a disappointing showing against No. 26 Dakota Geer of Oklahoma State. Rasheed trailed 1-0 in the third period, before he reversed Geer to take the lead. Geer eventually escaped a cradle attempt by Rasheed to get back to this feet with 1:10 remaining in the bout. The two traded blows in neutral for the better part of the next minute, before Geer scored two near-fall points off a scramble as the clock ran out.

Rasheed’s loss eliminated him from the tournament, having failed to place despite entering the weekend seeded second. The loss also brought Rasheed’s season to a close with a 20-2 record, with both losses coming to an end.

Rasheed is listed as a senior and was honored on Senior Day, but an application for a medical redshirt has been filed. However, Rasheed didn’t seem optimistic about its chances while discussing it earlier this season.

If this weekend is the end of the road at Penn State for Rasheed, he leaves with quite a track record, having wrestled at four weight classes in three years and finding success during his final two seasons.

Wrestling resumes tonight at 8 p.m. with the seven Nittany Lions still in contention taking the mat.

Share via
Penn State Wrestling Advances Six To Semifinals At NCAA Championships
https://onwardstate.com/2019/03/22/penn-state-wrestling-advances-six-to-semifinals-at-ncaa-championships/
Follow @onwardstate
Send this to a friend