Penn State Wrestling’s Bo Nickal ‘Could Be Great’ At MMA 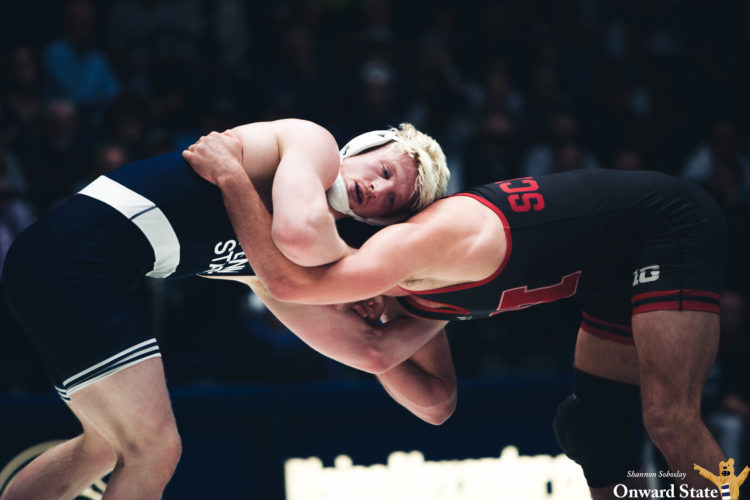 Two of Penn State wrestling’s reigning national champions have their sights set on competing in the 2020 Olympics, but both are looking a bit further down the road and planning to move from the mat to the octagon.

Bo Nickal and Anthony Cassar told Ryan Hockensmith of ESPN at the NCAA Championships last month that they intend to join the wave of ex-college wrestlers to make the shift to MMA after their international careers.

That wave is one that already includes three Nittany Lion greats and NCAA champs: Phil Davis, Bubba Jenkins, and Ed Ruth. Nickal and Cassar were two of a handful of big-name wrestlers interviewed for the story who have an interest in MMA — a switch-up from the traditional path into coaching that many former college stars have taken and succeeded on.

Hockensmith wrote that Nickal explained his future plans to make the transition “as though MMA is the obvious next choice, like a law school graduate passing the bar and saying he’ll probably be a lawyer.”

Nickal got a worthy nod of approval from UFC star and former NCAA champion Ben Askren. However, it came more as an alternative (albeit likely more lucrative) from competing in a loaded field of American wrestlers on the Olympic and World circuits.

“Bo Nickal absolutely, in a heartbeat, could be great,” Askren said. “The one thing I would tell him is, don’t wait too long. No matter how good wrestlers are, it’s gonna take them two or three years to get to a big show — maybe even longer because people don’t want to fight good wrestlers.

“As good as he is, it’s not looking real rosy for him to beat the other top American Olympic candidates. In my opinion, he’s not beating those guys.”

Askren might get to see Nickal’s talent for himself some time soon. Hours after winning his third-straight national title, Nickal sent wrestling Twitter into a frenzy when he challenged Askren, who’s nearly 12 years his senior, to a match.

Nickal’s mother Sandy, a former amateur boxer is as certain as “The Funk” when it comes to her son’s prospects as a fighter.

“It’d be a shame if he doesn’t get to wrestle in the Olympics,” she said. “But I don’t have any doubts about how well he’ll do in a cage fight. It’ll be bad for that other guy.”

Although he didn’t receive the same attention as Nickal in the article, Cassar elaborated on something he had mentioned during the season: The long-term goal is the 2020 Olympics, but after that, it’s going to be all about MMA.

“I grew up watching Fedor Emelianenko and Vitor Belfort as a kid,” he said. “It’s one of my goals, and I’m going to immerse myself in it someday.”

Share via
Penn State Wrestling\'s Bo Nickal \'Could Be Great\' At MMA
https://onwardstate.com/2019/04/03/penn-state-wrestlings-bo-nickal-could-be-great-at-mma/
Follow @onwardstate
Send this to a friend