The Bryce Jordan Center Felt Like A Basketball School 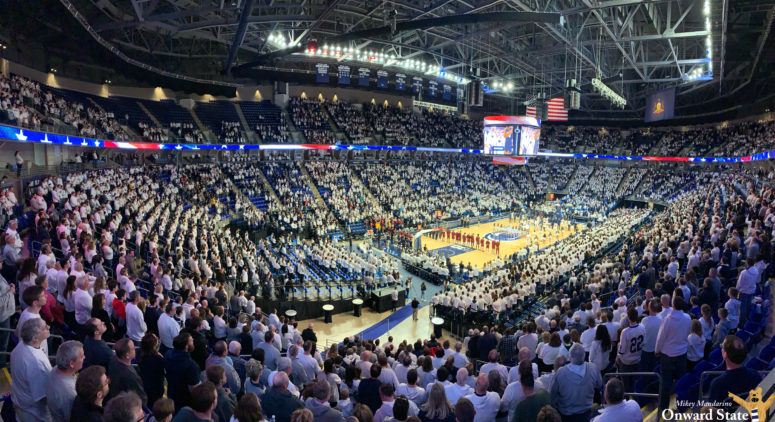 No. 22 Penn State men’s basketball’s climb continued with an 83-77 victory over Minnesota on Saturday, which was a monumental day for Pat Chambers’ program.

It’s safe to say that the win wasn’t monumental for strictly-basketball related reasons. The Nittany Lions didn’t achieve any significant statistical milestones — the win was the 1,494th in program history and Chambers’ 145th in charge of the program — but it was witnessed by the Bryce Jordan Center’s first sold-out basketball crowd in nearly a decade.

On Saturday, 15,261 fans flocked to the BJC to watch the game. It was the Bryce Jordan Center’s first sellout for a men’s basketball game since March 1, 2011. Penn State released 500 additional tickets for students on a first-come, first-serve basis, and there was a line that nearly stretched all the way to Beaver Stadium just for those seats.

Over the years, Penn State basketball has taken its fair share of lumps from the community — some of which were deserved, and others that might’ve been a bit harsh. I’m sure anyone who’s followed the program closely for the past decade has made their fair share of flaming bus or “h” jokes at the team’s expense. In my first three years as a student, people felt apathy and frustration whenever someone brought up Penn State basketball — myself certainly included.

That just isn’t the case anymore, and Saturday’s atmosphere was a perfect reflection of that.

I don’t regularly cover basketball for Onward State, but I attended Saturday’s game for a class assignment (aside: COMM 476 with John Affleck is freaking awesome and every journalism major should take it). After arriving at the BJC about an hour-and-a-half before tip-off, I got to witness this community rally around Penn State basketball like I’ve never seen it before.

Students — all clad in white — swarmed down the Bryce Jordan Center’s lower bowl just to have a shot at sitting in the student section. I wasn’t too surprised at how rowdy and disruptive the student section was, but the rest of the 15,261 fans at the BJC matched that intensity for all 40 minutes of the game.

Whether it was booing Minnesota star Daniel Oturu every time he touched the ball or cheering on a white-hot Penn State team, the whole crowd was engaged, energetic, and a huge reason why Pat Chambers’ side got the job done. People freaking believe in Penn State basketball now, and that’s all you can really ask for out of a fanbase.

I can safely say that Saturday’s game was the best college basketball atmosphere I’ve ever witnessed. Admittedly, that’s a small sample size comprised only of the handful of Penn State games I’ve attended and the smattering of Seton Hall basketball games my dad brought me to as a kid, but the atmosphere still deserves a ton of praise.

The White Out crowd seemed to pick up its support when Minnesota made a late push to try and overcome its 16-point halftime deficit. There was a noticeable tension in the building when the Gophers cut the Penn State lead to three late in the second half, but that tension quickly transformed into loud, raucous, and unwavering support for the team as it closed out a sixth consecutive victory.

On top of the great crowd and Penn State basketball’s objectively-great in-arena presentation, the “Everyone is Awesome” promotion added a dash of wholesome to an already-fantastic day. Lamar Stevens’ children’s book, which was illustrated by a handful of adults and children with Down syndrome, was given to the first few thousand fans at the game, and he and the illustrators stuck around to sign copies of the book postgame.

Attendance at sporting events is declining across the board in the United States, so it’s easy to understand why Penn State has struggled to put butts in the BJC’s seats. Unless you’re Duke, Kansas, or Kentucky, sell-out crowds and rowdy, fun atmospheres are more of a rarity than a formality.