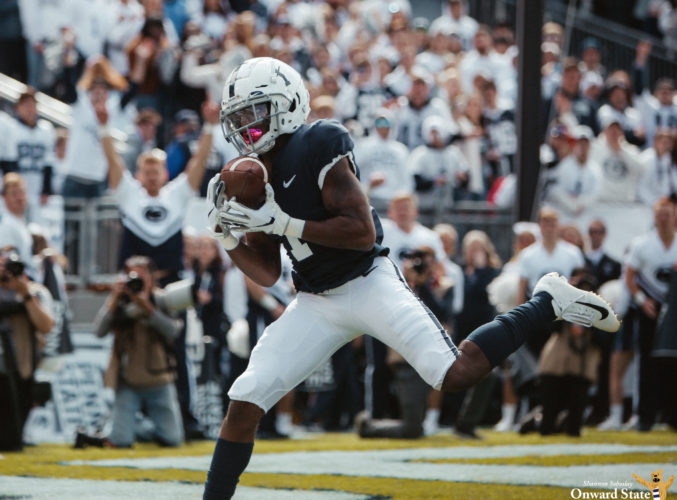 Hamler, who was selected with the No. 46 overall pick in this year’s draft by the Denver Broncos, was joined on Monday night’s episode by Jerry Jeudy, Derrick Brown, and Andrew Thomas. Jeudy played wide receiver at Alabama and will now play alongside Hamler in Denver, as the Broncos selected him with their first round pick.

Fans got their first look at the Hamler in Monday’s episode while he was training for the NFL Combine in Pensacola, Florida. His focus was on preparing for interviews with teams and showing scouts “how [he] sees the game.”

Along with training, Hamler even got a chance to showcase his cooking ability. The fan-favorite Nittany Lion cooked up some shrimp and chicken alfredo pasta, and even FaceTimed his mom, Tonya Gooding-Hamler, for some advice.

After his interview training and dinner, it was explained that Hamler likely wouldn’t run a 40-yard dash at the combine due to a lingering hamstring injury. He ended up sitting out of the majority of drills in Indianapolis due to the nagging issue.

“I worked all my life to get to this point. Not participating really hurts,” Hamler said. “But I’d rather play it better safe than sorry and stay ready for pro day. I’m not going to risk it at all.”

While he couldn’t run the 40-yard dash, Hamler did participate in the bench press. He explained that his goal was to hit at least 15 reps, but no other wide receiver who weighs less than 190 pounds hit more than 10 reps at this year’s combine. Despite that, the 178-pound Hamler managed to hit his goal exactly. The episode showcased his success, and he was even congratulated by legendary NFL wide receiver Cris Carter after nailing 15 reps.

“I told you I was strong!,” Hamler yelled after hopping up from the bench.

The speedster was planning on running his 40-yard dash a few weeks later at his pro day in Happy Valley, but it was soon explained that essentially all sporting events were shut down due to the coronavirus pandemic. Due to that, Hamler and several of the other players featured in the episode were unable to participate in pro days.

While he was disappointed he didn’t get another chance to show all of his skills to NFL teams, Hamler explained how he was finding a way to keep up his training at home in Pontiac, Michigan.

“I’m training every day, lifting as much as I can,” Hamler said. “It’s hard, it’s definitely some adversity, but you have to do what you can.”

As many Nittany Lion fans got to know Hamler’s parents during his time at Penn State, they once again played a big role in Monday’s episode. His mom shared videos of herself chasing the wide receiver up a hill to keep up with his drills, while his dad even made him a pull up bar.

Along with the training help, Hamler explained some of the positives of spending extra time at home.

“I’ve gotten to see my family a lot more than I usually can here at home,” Hamler said. “Sitting here with my mom and dad and just hanging out with them is something I normally can’t do, so I’m just trying to embrace the moment.”

Possibly the best part of Hamler’s extended home time was when he bought his own car. He showcased his new wheels to everyone watching at home, including the many pink details on his car. His choice of color was in honor of his grandmother who battled breast cancer.

Plenty of Penn State fans likely pulled out their tissues towards the end of the episode, as Broncos head coach Vic Fangio called Hamler to tell him that he’d been drafted. Fangio is from Dunmore, Pennsylvania, so he even explained to Hamler that plenty of his relatives are Penn State fans and were hoping that he’d draft him.

It was a heartwarming moment to watch, as Hamler and his mother hugged and celebrated him realizing his dream.

“We did it! We’re going to Denver,” Gooding-Hamler said.

The episode closed out by showing a discussion between Hamler and his new teammate in Denver, former Alabama wide receiver Jerry Jeudy. Hamler, Jeudy, and even former Penn State wide receiver DaeSean Hamilton will make for a Broncos offense that could be very hard to stop.

Share via
KJ Hamler\'s Family, Path To The NFL Draft Featured On ESPN\'s \'Hey, Rookie\'
https://onwardstate.com/2020/05/05/kj-hamlers-family-path-to-the-nfl-draft-featured-on-espns-hey-rookie/
Follow @onwardstate
Send this to a friend