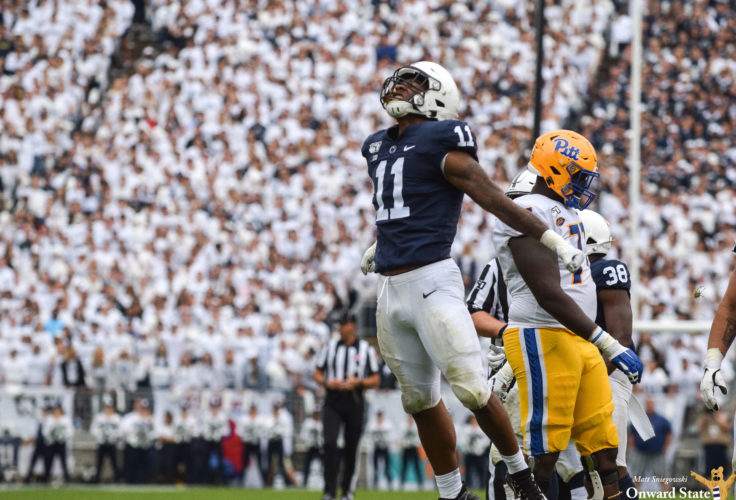 Update, August 6: Micah Parsons has officially announced he’ll opt out of the 2020 college football season and begin training for the 2021 NFL Draft, according to his Snapchat story.

“Want to thank penn state for everything but i will [be] declaring for the 2021 NFL DRAFT!” Parsons wrote. “Thank you penn state!! All love!!”

Parsons also posted a video on his Instagram Thursday afternoon.

“My opportunity has finally arrived. As I considered all my options for the 2020 season, I decided I needed to make a choice,” Parsons said. “The potential risk to the health and wellbeing of my son far outweighed my urge to play football this season. Therefore, I decided that I will opt out of the 2020 season and prepare for the 2021 NFL Draft.”

Original Story: Penn State football linebacker Micah Parsons is expected to opt out of the 2020 college football season and declare for the 2021 NFL Draft, according to Yahoo! Sports’ Eric Edholm.

Sources told Eldholm and Yahoo! Sports Parsons is expected to make his decision official Wednesday morning. Individuals close to him expect him to leave the program “barring a last-minute change of heart.”

Should Parsons leave the team, Penn State would lose an incredible talent. In 2019 alone, the star linebacker racked up a team-high 109 tackles, five sacks, five pass deflections, and four forced fumbles. Additionally, he was named the Big Ten’s Linebacker of the Year and a consensus All-American.

So far, no known Penn State football student-athletes have officially opted out of the upcoming season. However, star Minnesota wide receiver Rashod Bateman opted out of the season earlier Tuesday.

Neither Penn State football nor Penn State Athletics responded to a request for comment regarding Parsons’ reported decision.