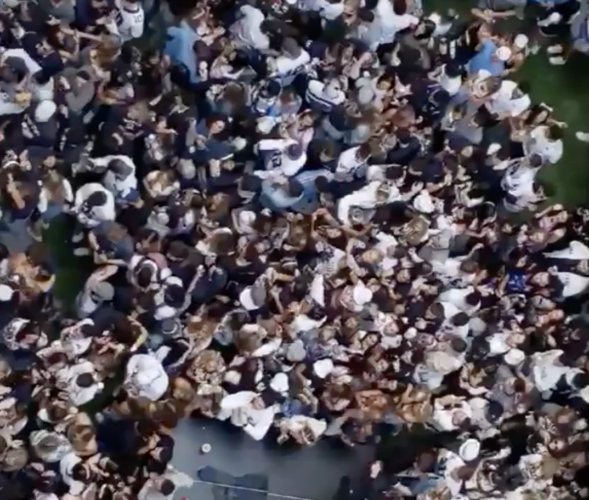 Update, October 26, 3:30 p.m.: The State College Borough released a statement acknowledging this weekend’s reported gatherings and said law enforcement will work with downtown and Penn State officials to address them.

“These illegal gatherings put the health, safety and welfare of our community at risk and puts undue strain on the local healthcare system,” the borough said.

State College police said they responded to and dispersed gatherings at Penn Tower, HERE State College, and The Rise apartment complexes Saturday. They found each location had more than 100 individuals gathered without proper distancing, face masks, or precautions — all violating local and state orders.

The State College Police Department, in conjunction with Penn State’s police, is conducting a follow-up investigation to identify those involved with the “illegal gatherings.” Police said they’ll use video recordings to assist in identifying those involved “with the intent of issuing citations for the violation(s).”

Additionally, those found to be Penn State students will be referred to the university for potential sanctions.

“In anticipation of this coming weekend, the State College Borough urge all community members, including PSU students, to take responsibility in keeping our community safe by following local COVID-19 ordinance and other COVID-19 guidelines,” the borough said.

The borough added keeping State College and Penn State safe requires a “collective effort from everyone.”

Update, October 26, 3 p.m.: Penn Tower has closed its second-floor deck following the “irresponsible behavior of several hundred persons,” according to an email sent to residents.

“We have evidence of these people violating PSU and State College Borough rules and policies addressing COVID-19, which includes mask wearing and limited gathering.”

Meanwhile, The Rise didn’t take direct action following Saturday’s reported parties. However, its management said it will meet with Penn State officials, borough officials, and local law enforcement to address gatherings “on a larger scale,” according to an email sent to residents Monday.

The building said residents can expect an update by Wednesday, October 28.

The most notable gathering seemed to have happened at The Rise, captured on an Instagram video by Penn State sophomore John Auerbach.

“These people are the reason that people with preexisting conditions who are at risk for severe infections are forced to be isolated for months. Because apparently partying is more important,” Auerbach said on Instagram. “It’s just so sad that people would be so selfish and inconsiderate. Like, they really left the entire place trashed afterwards for the staff to have to clean up. I’m willing to bet 90% of those kids either don’t live at The Rise or they are living here with their parents’ money.”

HERE, State College’s newest (and arguably most luxurious) apartment complex, also seemed to have hosted a big party, which one Snapchat user labeled “a cess pool [sic]” in a video obtained by Onward State.

On paper, these parties would violate State College’s coronavirus mitigation ordinance, which bans large gatherings and requires mask-wearing when necessary. If enforced, individuals in violation could face civil citations and $300 fines, plus any additional court costs.

The Rise, HERE, and Penn Towers did not initially respond to a request for comment on Saturday’s parties.

Earlier this month, Penn State President Eric Barron launched a new campaign titled “Our Community. Our Responsibility.” to encourage students to refrain from attending gatherings that could increase coronavirus spread. Local businesses and leaders also echoed that sentiment in a joint statement.