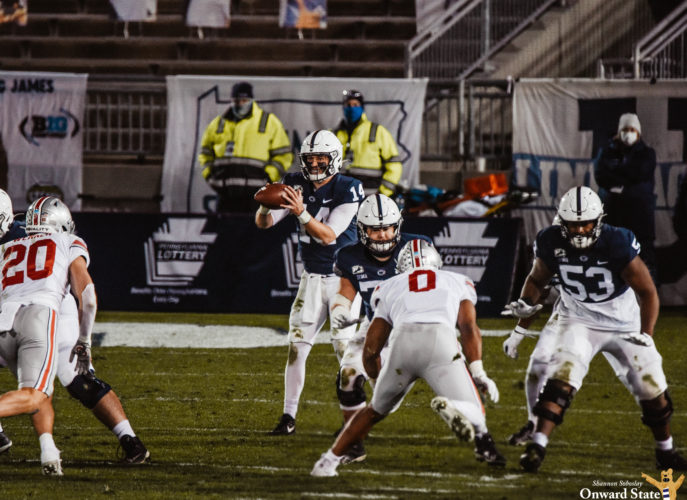 Right now, Penn State football is the worst team in the Big Ten.

The Nittany Lions’ 0-4 record makes them the only winless team in the conference, and James Franklin’s squad hasn’t shown many signs that it’s going to get in the win column anytime soon. There’s plenty of issues to point out for Penn State as we reach the halfway point of the season, but none are bigger than the brutally slow starts it’s dealt with.

In just about every loss the Nittany Lions have endured thus far, almost everything points back to the group taking a while to wake up on either side of the ball.

Against Indiana week one, Penn State’s offense sputtered in the first half. Against Ohio State, well, the Nittany Lions just couldn’t do anything out of the gate against a superior team. For Maryland and Nebraska, Brent Pry’s defense couldn’t stop a nosebleed.

Look, you get the point. This team has stumbled in the opening minutes of every game so far. But to take a look at this issue on a deeper level, we’re analyzing just how ugly it’s been for the Nittany Lions in first halves.

On the offensive side of the ball, Penn State is averaging just 145.7 total yards of offense in the first half and has scored just two touchdowns. Compare that to the second half, where the Nittany Lions have put up 1,165 total yards, putting them at an average of 291.25.

Along with the yardage, the Nittany Lions have scored 11 of their 13 touchdowns on the year in the second half. One of Penn State’s most productive first halves came against Nebraska this past weekend, as it put up 191 total yards of offense. However, the Nittany Lions put up just six points on two Jake Pinegar field goals despite two trips deep into Nebraska territory.

While Penn State’s offense has struggled to keep up, Pry’s defense hasn’t added any value, either. With a lack of scoring for the Nittany Lions, opponents have managed to put up a huge amount of points and put Penn State in huge holes.

No matter how much your offense wakes up in the second half, it doesn’t matter when your defense is giving up an average of 226.25 yards and 23.25 points in the first. Like the offense, however, the defense has battled back in essentially every second half.

Against Maryland, for example, the Nittany Lions’ defense allowed no touchdowns and 70 yards of offense to the Terps in the second half after giving up an ugly 335 yards and four scores in the opening 30 minutes.

This past weekend, the Nittany Lions didn’t allow any second-half touchdowns to the Cornhuskers, either.

The problems are plenty for Penn State on either side of the ball, but things like offensive efficiency, tackling, and overall hustle always seem to improve in the second half. This is a talented conference, however, and in a shortened season such as this one, the Nittany Lions can’t afford to sleepwalk through the first half.

In most of James Franklin’s postgame press conferences, he’s discussed how he liked a lot of things his team did in the second half. But, as we all know, it just doesn’t matter if you don’t do any of those things in the first half.

After Saturday’s loss, the head coach tried to diagnose the reason for the team’s ugly starts.

“In my opinion, it’s the turnovers,” Franklin said. “It’s hard to get into a rhythm when you don’t have the confidence that you’re not gonna turn the ball over.”

It’s not hard to realize that a lot of that falls on Sean Clifford. As the quarterback turned it over twice in the first half, including a fumble that gave Nebraska an easy touchdown, and has thrown six interceptions on the year. To put that into perspective, Clifford only threw seven picks in his first season starting last fall.

While you can in no way put all of the first-half struggles on Clifford, there’s no denying Will Levis gave the team a spark when he entered Saturday’s game in the second quarter.

Whether we see Levis or Clifford under behind center in Saturday’s game against Iowa, the Nittany Lions will need to get going early and often on offense and defense. The Hawkeyes currently boast a solid 2-2 record, including convincing wins over Michigan State and Minnesota.