Arnold Ebiketie, Penn State Defenders ‘Showed Up When It Mattered Most’ In Season-Opening Win 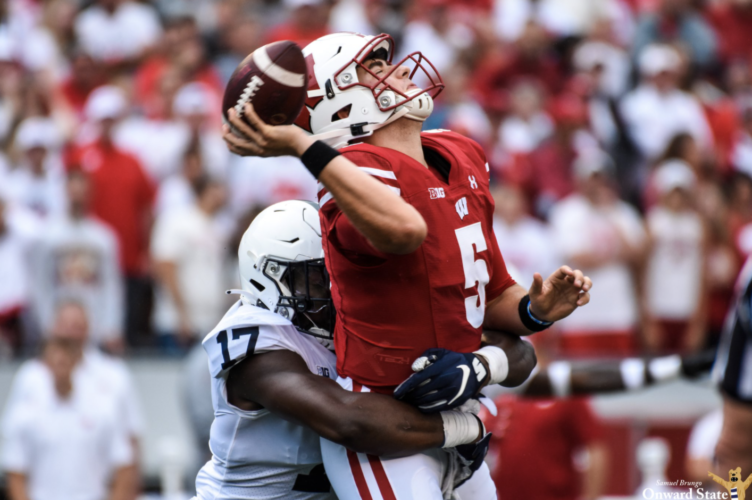 As the clock winded down on Penn State football’s season opener against Indiana in 2020, Brent Pry’s defense just couldn’t earn that final stop to put the game away.

That loss cascaded into an unprecedented five straight defeats for the Nittany Lions, which were mainly marred by inconsistencies on either side of the ball. During Saturday’s victory over Wisconsin, Penn State’s defensive stars were up to the task on countless occasions.

Defensive line coach John Scott Jr. had that loss in Bloomington on his mind Saturday, and he made sure his players did, as well.

The final two interceptions by Jaquan Brisker and Ji’Ayir Brown are rightly the highlight stops of the day, but the Nittany Lions made massive plays when needed on several other occasions. Notably, as Wisconsin set up shop on Penn State’s eight-yard line late in the first half, redshirt junior defensive end Nick Tarburton was in the right place at the right time.

Throughout the day, however, Arnold Ebiketie was the face of opportune plays for Penn State. In his first game as a Nittany Lion, the Temple transfer made seven total tackles, had a sack, and hurried Graham Mertz on multiple occasions. Ebiketie’s short list of key plays includes a near forced fumble early, a blocked kick to keep the game scoreless, and the final quarterback hurry that helped put the game away.

As the clock ticked down on Wisconsin’s final opportunity, Ebiketie wrapped up the sophomore Mertz and forced him into an intentional grounding call. That play forced the Badgers into a nearly impossible 3rd and 20 and cost them a 10-second runoff. From there, Brown picked off Mertz’s desperation heave, and the Nittany Lions escaped victoriously.

For James Franklin and the rest of his staff, game-sealing plays like that by Ebiketie aren’t necessarily a huge surprise.

“There’s been a buzz about ‘AK’ since he showed up on campus,” Franklin said. “He’s an explosive guy, a productive guy. I think he’ll only get better from this.”

Penn State’s defense faced a whopping 95 plays over the course of 41 minutes from a bruising Wisconsin offensive line. While the Nittany Lions’ offense struggled to stay on the field for much of the day, Pry’s group truly bent but never broke.

Mike Yurcich’s offense moved fast and made plays when it needed Saturday, but the defense was what kept the Nittany Lions from yet another heartbreaking defeat. Battles upfront from Ebiketie and Mustipher, among others, stand out when considering how close Wisconsin came to wiping away Penn State’s lead.

“It was tough, especially with the tempo our offense runs, we’re always on the field,” Mustipher said. “We do a great job in the offseason with putting ourselves in situations that are uncomfortable all the time…This offseason was the toughest I’ve ever had.

“We were prepared and it showed up when it mattered the most,” Mustipher added.

In the lead up to Penn State’s 2021 campaign, the defensive line wasn’t always the story. While Brisker and the secondary had been noted for plenty of experience and skill, the losses of Shaka Toney and Odafe Oweh in the trenches was an unsettling prospect for many Nittany Lion fans.

Despite that, Saturday proved that the veteran leadership of players such as Mustipher and Tarburton, paired with the pure skill of Ebiketie, can lead to some pretty exciting success for this defense.

Penn State fans are no stranger to the heartbreaking final scoring drive, but the group stepped up to the test in as convincing a manner as possible on Saturday. For Ebiketie and the rest of the defense, stepping up when needed is just part of the expectation.

“We knew [Wisconsin] had two timeouts. We knew we were gonna get the opportunity to get back on the field,” Ebiketie said. “We weren’t scared at all. We were prepared…We had to stop them to win the game and that’s exactly what we did.”

Share via
Arnold Ebiketie, Penn State Defenders \'Showed Up When It Mattered Most\' In Season-Opening Win
https://onwardstate.com/2021/09/04/arnold-ebiketie-penn-state-defenders-showed-up-when-it-mattered-most-in-season-opening-win/
Follow @onwardstate
Send this to a friend