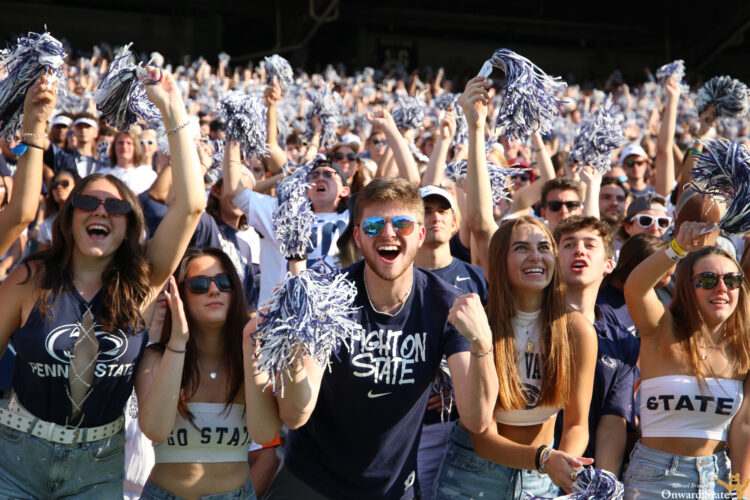 Well, that was awesome.

For the first time since November 30, 2019, Beaver Stadium welcomed a full-capacity crowd this past Saturday. The Nittany Lions celebrated the family reunion perfectly by rolling Ball State 44-13 in front of 105,323 fans.

Big-time fall football games in Happy Valley have become a given over the past several decades. The tradition and importance of what football season does for this community can’t be overstated, but we were all reminded last year how we can’t take any of that for granted.

I mean, seriously. Who would’ve thought a dreary, boring game against Rutgers in late November would be the last “real” home game we’d see the Nittany Lions play for roughly 21 months? Looking back now, however, I’d bet plenty of people were missing days just like that one as they watched last year’s home games on TV in their apartments and dorm rooms.

“It’s one of those things where last year wasn’t Penn State football in so many ways,” Clifford said. “The way that we played wasn’t great, but at the same time, we were in here by ourselves. To be here with everyone again, it raises the play of the game for us, and at the same time, I think we feed off of that energy. It’s home. It was great to be back here with everybody.”

The Nittany Lions struggled immensely last year. But if James Franklin’s team managed to win a few more of those games, or even put together a winning record, would we really look back on that season in a much brighter light?

Of course, Penn State football fans, including myself, would prefer the team didn’t open 2020 with an 0-5 record — that’s a given. But last year’s inconsistent on-field product isn’t always the first thought that comes to mind when considering just how sad it all was.

I covered last year’s game against Ohio State at Beaver Stadium. I felt extremely lucky to be there, but it was truly upsetting and eerie to be watching the biggest game of the year, and what would’ve been the White Out, with a couple of hundred people in the bleachers.

Moments like that one really stick out to me when looking back on last season — not the final scores of the games.

I’ve known how much I missed the Penn State football experience for a while now, but it didn’t fully hit me until this past Thursday afternoon. Campus and downtown officially started buzzing with alumni and fans returning for the game, while RVs started to pack in helped set the stage for the best tailgating scene in the country.

It was more of the same on Friday. Town only got busier, and it was clear just how happy people were to be back at this place. Restaurants and bars were packed with lines out the door, while afternoon classes were sparsely attended.

All of this took place before the clock even struck midnight on gameday. Football fan or not, it’d be hard not to have a smile on your face walked around College Ave. on either of those afternoons.

The good vibes rolled on Saturday as the tailgate lots were packed all day ahead of the home opener.

All of this build-up was a clear reminder that Penn State football isn’t anything without the community that comes with it. Last season was just about the game, and that simply isn’t enough. As a packed stadium sang the Penn State Alma Mater ahead of Saturday’s contest, the emotion was palpable.

The football game is just a small piece of what these weekends are for so many people. The moments, memories, and friends that are tied to fall Saturdays in Happy Valley are countless, and finally getting to return to that this past weekend was pure joy.

As a senior, it’s bittersweet knowing I have only a handful of games left here as a student. But if last year taught me anything, it’s that I have to do all I can to enjoy every second of the moments that come with Penn State football. Rooting for and covering a winning team is an added bonus, but just being with friends and family at this place I love is something I’ll appreciate every second of.

Share via
Win Or Lose, Let\'s Never Take Our Penn State Football Weekends For Granted
https://onwardstate.com/2021/09/13/win-or-lose-lets-never-take-our-penn-state-football-weekends-for-granted/
Follow @onwardstate
Send this to a friend