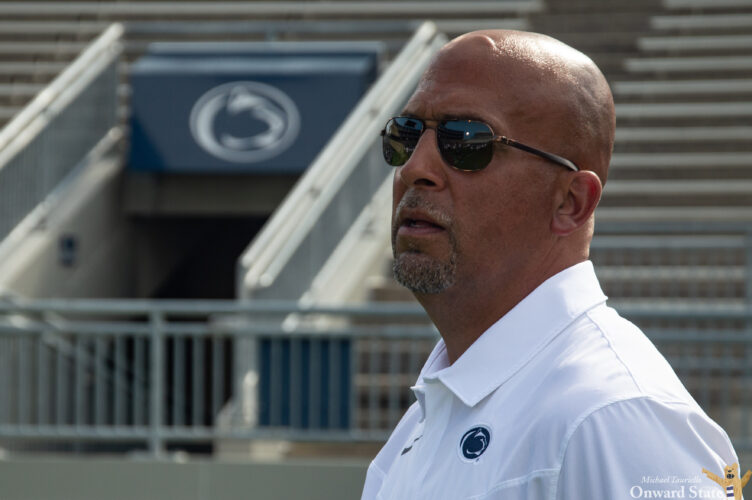 James Franklin’s team is in a bad spot right now, and the Penn State football head coach didn’t necessarily help the situation when discussing his commitment to Happy Valley at his Tuesday presser.

As the Nittany Lions turn their focus to No. 5 Ohio State, they’re also trying to recover from losses to Iowa and Illinois. The most recent defeat to the Fighting Illini, a 20-18 loss after nine overtimes, is being discussed as one of the worst in Franklin’s seven years and change at Penn State.

With all of that going on, Franklin is also rumored to be heavily in the mix for head coaching vacancies at USC and LSU. CBS Sports’ Dennis Dodd even reported that the two top-tier programs are expected to take part in a “bidding war” at season’s end for the Langhorne, Pa. native’s services. A report also came out Monday night that Franklin switched his agent to CAA’s high-profile Jimmy Sexton, but the head coach noted Tuesday that switch took place over the summer.

Either way, Franklin’s answer to a point-blank question about his commitment to the Nittany Lions was hardly reassuring, especially amid all of these rumors.

“Obviously I’ve been asked this question multiple times, and my focus is completely on Illinois and this team, and this program,” Franklin said. “I think I’ve shown, over eight years, my commitment to this university and this community. That’s kinda my statement.”

Aside from saying Illinois instead of Ohio State, Franklin truly didn’t make it clear that he’s 100% committed to Penn State’s program. Sure, he’s focused on the task at hand in recovering from these two losses, but if he wanted to eliminate these distractions, why not just shoot down the rumors?

Look, you can’t argue with Franklin’s sentiment that he’s proven his commitment over these past eight years. The head coach inherited a team just a couple years removed from a massive scandal that led to harsh penalties, and after two 7-6 seasons turned the Nittany Lions into Big Ten Champions. The Illinois loss was brutal, and there’s no denying that. But it’s not fair to ignore everything Franklin has done for this program over the course of his time here.

However, with all of that in mind, if Franklin’s commitment were still so strong, it’s hard to imagine he’d completely dodge the question. We can look at the head coach’s history in Happy Valley all we want, but the fact of the matter is he didn’t state he’s committed to Penn State when asked directly about it.

If you needed some clarity on how direct the question was, here’s the exact phrasing from Audrey Snyder of The Athletic:

“You just mentioned Eric Barron and kinda your confidence and your faith in [Penn State] getting that right. Are you committed to being the head coach here beyond this season?”

It’s hard not to see a simple “yes” would suffice here — if Franklin is in fact committed to the Nittany Lions. Sure, he has to play the politics game and get himself some leverage so more money gets pumped into the program, but at some point you’d think he’d want to eliminate this distraction and just move on. If Franklin is assuring to his players internally that he’s committed to the program, that’s great. But it’s not unfair to argue a public explanation would go a long way in stopping the outside chatter.

Maybe Franklin could’ve even taken a page out of Mike Tomlin’s book. The Pittsburgh Steelers head coach was also thrown into the mix as the possible next head coach of USC, but he put those rumors to bed fairly quickly with his answer.

If Franklin is tired of answering questions on the subject, he’s only going to get more frustrated over the course of this next few weeks. The head coach only clouded the situation more with his dodgy answer on Tuesday, and leaves fans wondering if he really is content with his position in Happy Valley. Franklin did sign an extension back in 2020 that would theoretically keep him at Penn State through 2025, but his buyout is currently worth $4 million.

Franklin loves to go 1-0 each week and avoid distractions, but it seems the rumor mill will only roll at a lightning pace now. Unlike Tomlin, the Penn State football head coach hasn’t taken any public steps to eliminate himself from the number of attractive openings in college football at the moment.

Share via
James Franklin\'s Cloudy Commitment To Penn State Doesn\'t Do Him Any Favors
https://onwardstate.com/2021/10/26/james-franklins-cloudy-commitment-to-penn-state-doesnt-do-him-any-favors/
Follow @onwardstate
Send this to a friend