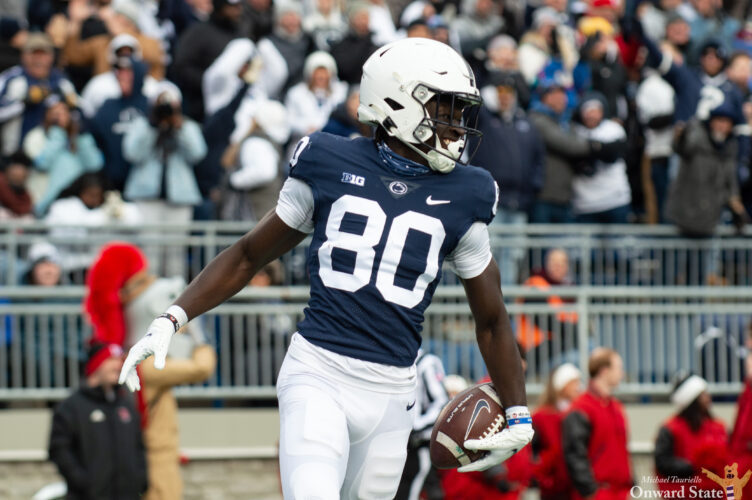 It was quite the scene on Penn State’s sideline Saturday afternoon when redshirt freshman Malick Meiga broke free for his first career touchdown.

James Franklin made sure to celebrate with the young wideout as he returned to the sideline, but also says he nearly strangled him after a bit of a premature celebration.

“He put his arms up and celebrated at like the five-yard line, and if they wanted to they could’ve thrown a flag and it would’ve been no touchdown,” Franklin said. “As much as I was hugging him and telling how happy I was for him, I was also telling him if he would’ve gotten that penalty he could’ve run right out of the tunnel. Because he wouldn’t have wanted to come back to the sideline.”

Meiga was clearly amped as he reached pay dirt on the pass from fellow freshman Christian Veilleux. But the Quebec native is giving plenty of reason for the rest of his team and coaching staff to be excited, too.

The 6’4″, 200-pound wide receiver burst onto the scene with that 67-yard grab to put the Nittany Lions up by three scores against Rutgers, which was the third catch of his young collegiate career. Up to that point, Meiga had made catches against Michigan and Maryland.

While he’s slowly begun to work his way into Penn State’s offense, his potential seems to only be on the rise. Franklin noted that Meiga has a true 4.3-second 40-yard dash and will act as a new kind of threat for Mike Yurcich’s attack.

“You look at his body, you’re talking about one of the taller receivers that we have…One of the faster guys on our roster,” Franklin said. “I think he’s got a chance to develop into a real vertical threat, maybe more so than we’ve had really in a number of years. That’s something we need.

“Obviously Jahan has brought that and KeAndre can do that. Parker shows flashes too. But I think he’s got a chance to be a real vertical threat up the field,” Franklin added.

Franklin also noted that Meiga has worked on his ball skills with the sophomore Washington, who’s one of his best friends on the team.

While Meiga spends plenty of time with Washington and the rest of the wideouts, he also has a close relationship with the young star who threw him the touchdown pass. The pair of Canadians both trained together before arriving in Happy Valley.

Similar to other Canadians on Penn State’s roster, Meiga didn’t have the usual path to Happy Valley. He committed to Penn State’s class of 2020 back in August 2019 and was rated as a three-star prospect and the top player from Quebec.

Since arriving at Penn State, fellow Canadians such as Jesse Luketa and Jonathan Sutherland have further helped Meiga with the transition.

“That affected my decision a lot, especially Jesse Luketa,” Meiga said. “He speaks French, too. My first language is French. I’m still not that good with English — still trying to figure it out. It’s great to have a person that you can talk to in your own language — your first language.

“That definitely had a major impact on me choosing Penn State. Ever since I’ve been here they’ve been great mentors,” Meiga added.

As a top recruit from his home province, Meiga also received offers from Baylor and Cincinnati, among others. The athletic receiver started to get attention as a star in high school but didn’t play football until eighth grade. Once he started to get involved in camps and more competitive football, however, he began to see he could play at the next level.

After not getting any game action as a true freshman in 2020 and a bit of a slow start to 2021 while dealing with an injury sustained in the offseason, Meiga’s ultimate goal was certainly realized with Saturday’s touchdown at Beaver Stadium.

“Basically I had an over route. I just gotta get over the field and get in the quarterback’s vision,” Meiga said. “So, I just took the first step and saw the cornerback going to the left…I see myself wide open and I raise my hand, Christian sees me. I caught the ball and just ran out there in the open field — it was a great feeling.”

While the 2021 season is coming to its end, Meiga now puts himself in a position to play a much larger role in the Nittany Lions’ offense next fall. With Jahan Dotson presumably off to the NFL Draft, Washington, Lambert-Smith, and Meiga will be the leaders of the group from an experience standpoint.

For Meiga and the rest of the trio, learning from a player of Dotson’s caliber could pay dividends throughout their career.

“Learning from Jahan, Parker, KeAndre — really all the receivers in the room — everybody comes with a different approach and everybody brings something to the table,” Meiga said. “Since I’m from Canada, I did not know much before I came here. It feels good to learn and take a little bit from everybody.”