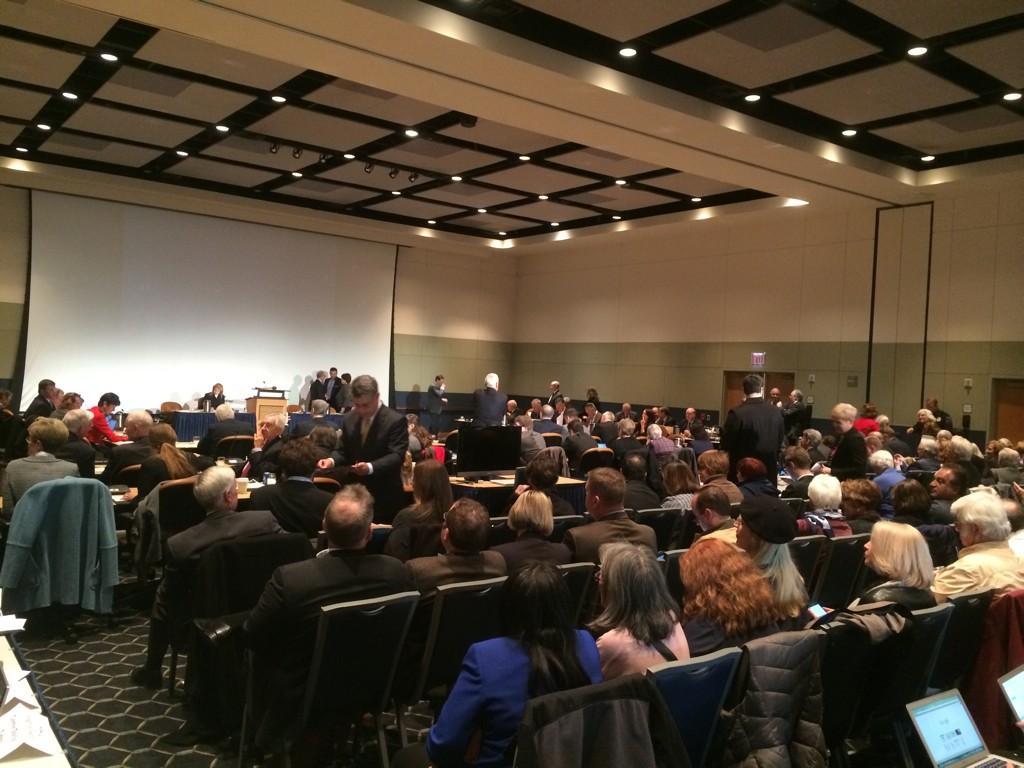 It was unmistakably the longest Board of Trustees meeting in recent memory, and few could say the nearly five hours spent at the Penn Stater Friday afternoon were anything but exhausting. To recap about every inappropriate comment, every snicker, and every interruption — from the audience and trustees alike — would be a monumental task, but there were two central takes that came out of today’s circus of a meeting: a compromised governance reform package finally passed and Penn State tabled discussions about potentially joining Jake Corman’s lawsuit against the NCAA.

But first, the stuff that didn’t induce Hitler references. Now on to the fun stuff.

The first fireworks came with the new governance reform proposal. Called the A+ plan, the new structure includes the same makeup as the current one, plus a voting seat for the immediate past president of the Alumni Association, a faculty member, a student, and three at-large seats selected internally. Initially, the plan included stripping the ex officio secretaries of their voting privileges, but after a request from Governor-elect Tom Wolf, that element of the proposal was removed for further discussion with a 17-9 vote. I will have more thoughts on the proposal over the weekend (it seems to me the only positive change is a permanent student), but suffice it to say that everyone who asked for a seat seems to have gotten one, without any real substantive changes. Governance consultant Holly Gregory, who was undoubtedly paid a lot of money to help craft this plan, was grilled by several board members for what is seemingly minimal change.

While the new plan has a number of issues, skeptical trustees seemed to focus on the Alumni Association seat as the main point of contention. Despite direct requests to defend the logic of adding that seat, Masser would not allow Gregory to answer, instead referring to the committee.

“This proposal adds valuable constituencies to the board,” Masser said. “It adds three at large seats that allow this board to be more effective by filling experience gaps. And it spreads the power so no two constituent groups can determine an outcome.”

A vote to table the proposal failed 15-11, with every alumni trustee plus Ed Hintz and Allie Goldstein dissenting. After further banter, the governance proposal passed 16-9 with Goldstein’s support and Hintz out of the room during the vote.

Just before the meeting closed, Lubrano proposed a resolution that would enjoin Penn State as a plaintiff on the lawsuit with Corman against the NCAA. Trustee Kathleen Casey immediately moved to postpone the resolution until the January meeting so that an executive session discussion could be held to sort things out. This was, naturally, met with the frustration of the already agitated crowd and the alumni trustees.

“If we walk away from this with all that’s going on and say kick it down the road, I think we’re making a terrible mistake,” trustee Bob Jubelirer said. “This is serious serious business. Our brand has been brutalized because of the NCAA…I’ll stay here as long as it takes. Let’s go on the record with what’s going on here.”

Things really boiled over when trustee Keith Eckel chimed in over the phone. Trustee Al Lord yelled “Oh be quiet!” while a member of the audience interrupted with “Hail Hitler!” and walked for reasons unknown as Eckel began to speak.

“I can’t go by what I read in the newspaper,” Eckel said, referring to the new NCAA emails. “I need to have legal counsel advise me or I can’t meet my fiduciary responsibility.”

After more interruptions and jeering, a vote to postpone the resolution until the January meeting after discussions in executive session passed 14-10, with all the alumni trustees and Goldstein dissenting.

As Kurt Vonegut, who would have turned 92 this week, said: So it goes.

What would you do if someone interrupted your class to make a panini?

“What’s truly important is, obviously, faith, family, and friends, and today we woke up with a great reminder [of that]. If you didn’t go home last night and hug your kids, you should’ve — that’s what I do. At any second, it could be gone.”