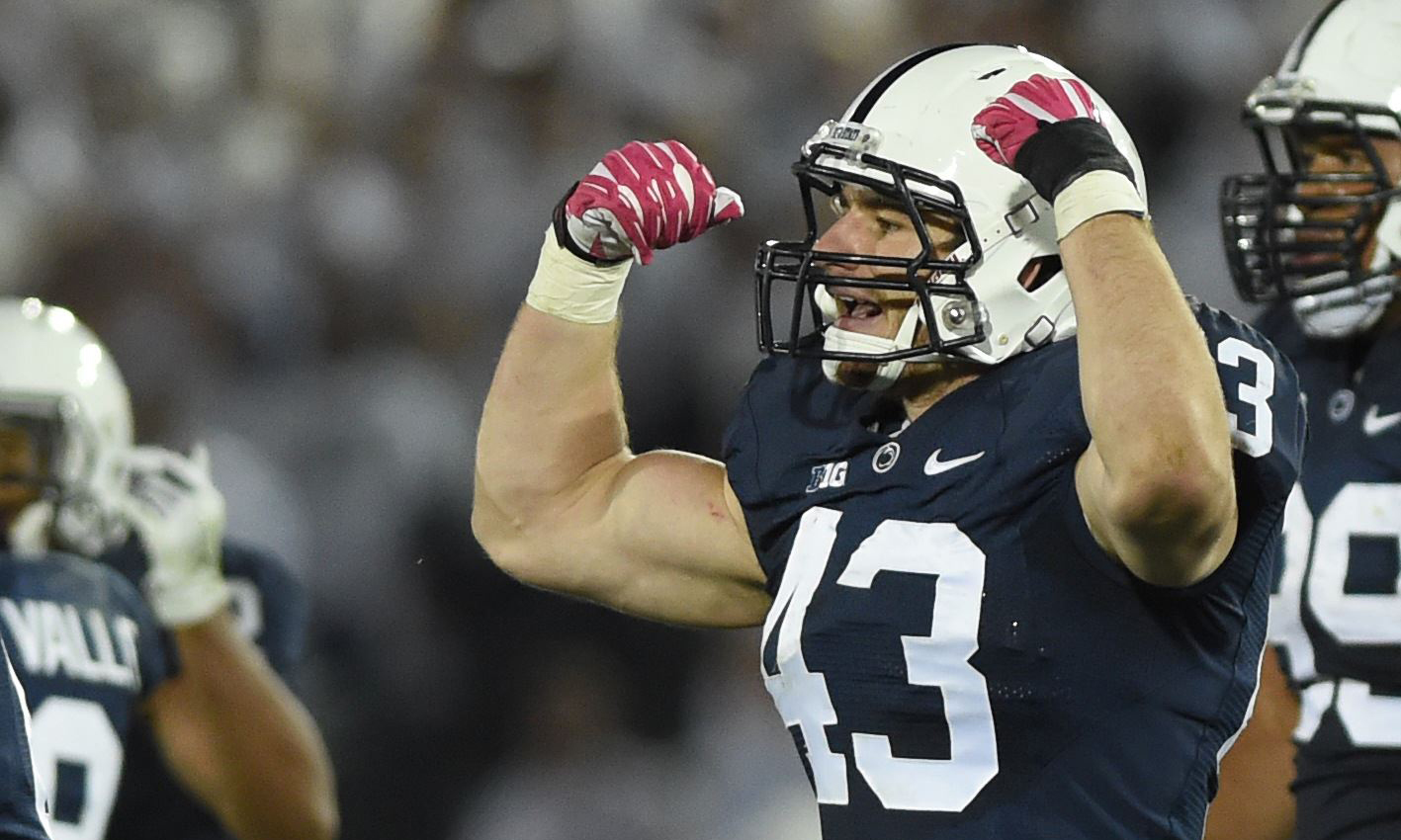 While Penn State football fans were busy keeping up with THON this weekend, Mike Hull and a few former Nittany Lion standouts took to the field at Lucas Oil Stadium for the NFL’s “Underwear Olympics,” known better as the 2015 NFL Scouting Combine.

The NFL Combine can make or break a prospect, depending on how he performs in the Combine’s series of drills built to show off the athlete’s array of physical skills. Penn State had a total of five representatives in Indianapolis, all with aspirations of boosting their draft stock.

Commentary: Amos didn’t jump off the page with his 40-yard dash time compared to times posted by other prospects, but shouldn’t see his stock fall too far based solely off of a single drill. Amos did however turn some heads with his 20-yard and 60-yard shuttle times –both top-tier times out of all participating defensive backs. Amos is a smooth runner, displaying fluid hips as he moves throughout the field. Amos has been praised for his ability to play the ball in the air, along with his versatility with experience at both corner and safety while at Penn State.

Amos is built well, but has been chided for his lack of tackling technique and playing conservatively in certain passing situations, as scouts have noticed that Amos would much rather see a play develop and react than think a step ahead and use his instincts. Teams should seek Amos’ services in the draft’s later rounds, as he fits the mold of a prototypical NFL defensive back.

Commentary: Donovan Smith turned in a solid Combine performance all across the board, finishing around the middle of the pack in most of the agility drills, while posting a modest 26 reps in the bench press for a man of his stature. Smith’s 109-inch broad jump placed him fourth out of all offensive linemen who jumped, giving scouts a glimpse of his explosive burst out of his stance — an important trait found in NFL-caliber offensive linemen. Though he enjoyed a sound combine performance, Smith turned the most heads while competing at the Senior Bowl, where plenty of notable NFL names took notice of Smith’s potential, including Senior Bowl director Phil Savage.

“He came in at 341 pounds, but he flashed the foot agility to play left tackle in the NFL,” Savage said in an interview on the Senior Bowl’s website. “I think he has future starter written all over him, and he definitely elevated his draft stock here in Mobile during the week.”

Scouts have noted that Smith struggles with the usage of his hands when blocking in run and pass scenarios, while occasionally playing them too low, accounting for a weaker initial punch in pass protection. While some scouts disagree on if Smith is best suited at the guard or tackle positions at the next level, there is no denying Smith’s potential. He’s even been thrown into the conversation as a potential second round pick. That should tell you something about where Smith lies in NFL circles. After his performance in Indianapolis, there’s no reason not to think Smith falls between rounds two and four come April. Commentary: Let’s just clear one thing up: Combine numbers for kickers and punters are essentially useless. They don’t reveal anything we don’t already know about a special teamer, save for the few who turn heads in the 40 or impress on the bench. What we do know is that Sam Ficken comes in as the top kicking prospect going into April’s draft, with a padded resume that includes numerous clutch kicks made throughout his career.

Ficken has the body type of a soccer player, highlighted mainly by his lanky legs. There is no denying his leg strength — Ficken drilled a career long 54-yarder against Kent State on a rainy afternoon in 2013 — nor his ability to come up in high-pressure situations. Ficken’s only real weaknesses are his low kick trajectory, which played a role having 10 of 75 career kicks blocked during his time as a Nittany Lion, and his touchback percentage of 30 percent.

In Ficken’s case, the positives outweigh the negatives, and he should be a late day three prospect at best. He will undoubtedly get scooped up immediately after the draft concludes should he go undrafted.

Commentary: The first thing that stands out about James is his mammoth frame and ridiculous size. Let’s face it, at 6-foot-7, 261 pounds, James is quite frankly a monster. Along with his body comes a large catch radius, which James uses to his advantage when going across the middle, especially in redzone situations.

Nobody expected James to run particularly well in the 40 — he’s never been one to beat defenders with his legs — but his performances in other important drills really add to James’ appeal. He finished tied for second in the bench press with 26 reps, while leading the pack in both leaping drills, finishing second and first in the vertical jump and broad jump, respectively. His leaping abilities, plus his towering size, will surely shoot him up draft boards all around the league, especially given the recent success of large pass-catchers Rob Gronkowski and Jimmy Graham, just to name a few.

James struggles as a run-blocker, but with proper technique and NFL coaching, a man of his size can easily develop into a serviceable blocker. Teams are beginning to favor big, athletic tight ends, and James certainly fits the bill in that category. Depending on how the dominoes fall, James could hear his name called in the middle rounds of April’s draft. Commentary: Mike Hull had himself one hell of a combine, as he dispelled any concerns about his athleticism after posting some stellar numbers. His 40-yard dash time of 4.68 was expected. Hull has never been the fastest straight line runner, but his performances in short-area drills like the three cone drill and 20-yard shuttle highlighted his ability to play hash-to-hash impressed.

His 40-time time may seem slow when paired with Clemson LB/DE Vic Beasley, who posted a ridiculous 4.53. Beasley and Hull are two completely different players, as Beasley plays more of an edge rusher role that would best suit a 3-4 defensive scheme. The 4-3 middle linebacker position best suits Hull at the NFL level, and his exceptional short-area ability will help him develop into a reliable playmaker in an NFL defense. Playing in the middle, it’ll be rare to see Hull line up directly against a tight end, let alone a slot receiver, instead maintaining zone responsibilities, along with the occasional spotlight on the running back in the backfield.

Scouts raved about Hull’s fluid hip movement as he went about the three cone drill, an essential physical characteristic of an NFL-style middle linebacker. The most impressive takeaway from Hull’s Combine performance was easily his showing on the bench press, where he posted the top linebacker number, while out-lifting a number of notable defensive line prospects. No matter how you look at it, there’s simply no denying Hull’s raw strength, a coveted trait among NFL franchises that should alone boost Hull’s draft stock significantly.