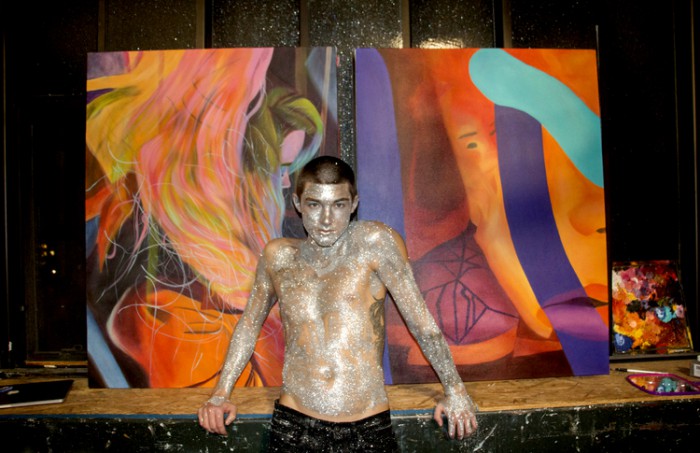 Penn State is famous for certain things: football, THON, the Smeal College of Business. And these things are famous for good reason, as we have some of the top athletics, philanthropic, and academic efforts in the country.

But Penn State’s smaller programs are just as impressive. The university is home to a myriad of small, but mighty majors. Plus, the thousands of clubs here are doing everything from Irish jigging to changing the world. These small corners of this massive school we call home are just as important as Beaver Stadium and the Bryce Jordan Center.

Welcome to Onward Artist. In this new segment, we’re introducing you to one of these small Penn State corners: the student art scene. The students in these stories would rather spend hours in a studio than a stadium.From oil painters to sculptors, these segments will introduce you to artistic talent all across campus.

My three-hour class in Patterson at 8 a.m. can be quite a drag. However, the early class lets me pass by the Patterson Gallery a few times a week. In the gallery, a new art student is featured each week with an official showing of their work.

This week, an exhibit of colorful oil painting portraits called ‘Honeymoon’ stood out to me. Two days later, I found myself sitting down for coffee with the artist himself in Au Bon Pain, just across the street from his exhibit. Meet Cale Coduti. Coduti is a current senior working towards a BFA in Drawing and Painting. Though he is originally from Michigan, Coduti and his family moved to State College during his sophomore year. “The transition wasn’t that hard. I love Penn State. I realized this is where I should be.” he said.

Though he loves State College, Coduti doesn’t plan to stay in town after graduation. His dream is to move to New York City.

“Though State College isn’t New York, I’ve realized I have a huge amount of resources here,” Coduti said. “I’ve meet people that know people, and so many doors have opened. Through media and all my connections, I don’t feel like I’m missing out.” Coduti posing for Natalie Leonard, his fellow classmate and friend.

Coduti’s latest exhibit is comprised of portrait paintings based on his own photographs of friends. Coduti harnesses his passion for glamour to draw inspiration, often looking to fashion and pop culture.

“I start with an image in mind, but I let surprises happen during the process. I look at fashion magazines and runway shows for color inspiration and model poses. I like the models to bring their own ideas to the set, so a lot changes in the moment of shooting,” he told Pond Magazine.

Coduti explained that he loves fashion and glamour, because it’s fun and striking. However, he is also drawn to classical art– specifically The Renaissance era. His work often combines classical artistic appeals with more modern ones, creating a shocking and intriguing hybrid. Coduti photographed a good friend of his, Steve Sloan, for one of his paintings. In the photo, Sloan was dressed in drag, a sensual pout on his face. “I enjoyed painting Steve in a style that felt very classical, but was also conducted in a modern way,” Coduti said. “The fact he’s wearing drag yet looks so traditional is such a bold contrast. I think it makes people think.”

Coduti doesn’t just push the boundaries of classical and modern in his art, he embraces the bold style in his own life. During a class critique last year, Coduti presented his art dressed in drag. “I wore 8” black heels, a black thong, a black fur jacket and a choker. My butt was out. It was my first time getting up in front of the teachers and students, and I wanted to make a statement. After that, critiques were less intimidating,” said Coduti.

His Patterson Gallery exhibit ‘Honeymoon’ focuses on rich, vibrant hues. Coduti’s goal was to make his audience feel infatuated and warm, letting them escape into a welcoming fantasy. Coduti sitting with a few of his pieces from ‘Honeymoon.’

“My idea for the show is to sweep people off their feet. A honeymoon is the ultimate fantasy and the beginning of a new life with the one you love. In the work, colors have opened up, which I didn’t expect,” Conduti said. “The show is about light and color but there is also a moodiness to the figures– maybe a hint that paradise doesn’t always work out.”

If you want to see more of Coduti’s work, you can check it out here.

Know any local artists that you think should be featured? Email [email protected] with any State College painters, sculptors, musicians, poets, or any artist in between you think deserves recognition.