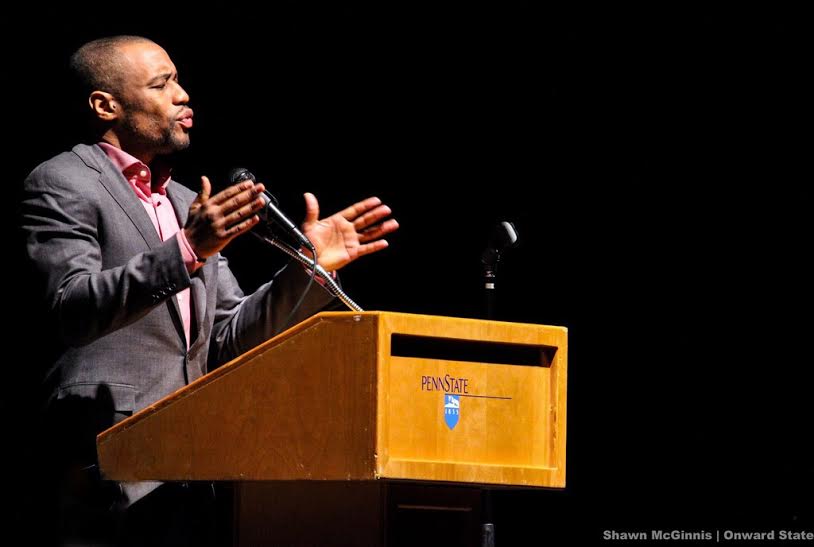 “How do we get out of a moment of chaos, and get to a world that is not yet.”

Marc Lamont Hill uttered this phrase in the beginning of his speech in Alumni Hall Wednesday night. Dr. Hill, who spoke as part of SPA’s Distinguished Speaker Series, addressed a number of topics in his lecture titled “Building Community in an Hour of Chaos: Progress in the Age of Obama.”

Dr. Hill has worked as a journalist, political activist, author, television personality, and professor. His wide ranging work has allowed him to gain a wide field of knowledge on major issues, which were then thrown into an open discussion among those at Alumni Hall.

The lecture, first and foremost, took a look at the challenges in the African-American community. To set a tone right from the get-go, Hill had the small crowd in attendance stand and sing the “Black American National Anthem.”

The major sticking point from the lecture came when discussing August 28. On that day in 1963, Martin Luther King Jr. gave his “I Have a Dream” speech. 45 years later on that day, Barack Obama gave his Democratic nomination acceptance speech. Some viewed that as the dream being realized, however, Hill does not believe in that “Disney-fied story.” There is so much history and so much to come that for Dr. Hill, accepting the moment as the full-circle change in African-American struggle is not good enough.

Dr. Hill’s passion for his work shined through the entirety of the lecture. Often direct and blunt with his choice of words, the influential leader spun the issues with care and was often applauded for the bold statements he made. The audience was as engaged as Hill throughout the hour-long session. The interactive atmosphere created an interesting and educational night, which will be tough to follow up for the next speaker in the SPA lecture series.