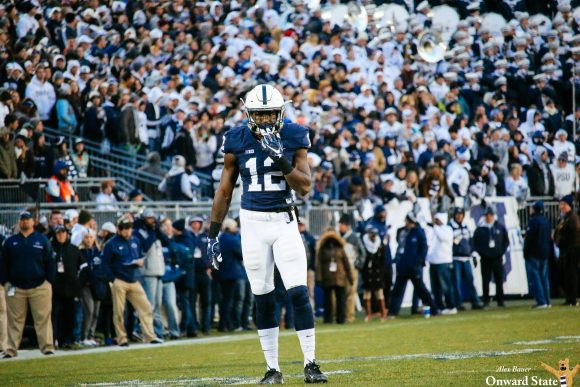 The NFL Draft is about a week and change away, meaning the lives of select Nittany Lions are about to change forever. Though a handful of former Penn State standouts hope to hear their names called on draft day, two in particular have the best odds of being selected.

We took a look at the top three destinations for wide receiver Chris Godwin ahead of next Thursday’s NFL Draft in this edition of Draft Destinations: Godwin is almost guaranteed to go the highest on draft day after a phenomenal performance at the NFL Scouting Combine. After an equally successful Pro Day in front of scores of scouts, here’s where Godwin projects — likely near the Round 2-3 range:

Godwin has an intriguing skillset as he has enough wiggle to create separation as a route-runner but he’s at his best when winning at the catch point on contested catches. His speed doesn’t always show up on tape, but he’s savvy enough to win down the field and add an intermediate and deep threat to an offense. Godwin should also be an early contributor on special teams due to the aggressive blocking ability that he has displayed in the run game.

The Bills make perfect sense for Godwin. He’s got an all-around skillset the team needs to surround its star talent with. Wide receiver Sammy Watkins can be elite when healthy, but thanks to strapped cap space, the Bills were forced to let key contributors like wide receiver Robert Woods walk in free agency. With no clear-cut No. 2 threat, rumors are swirling that the Bills might take a chance at the top of the draft at this position.

While rolling the dice on Clemson’s Mike Williams or Western Michigan’s Corey Davis with the No. 10 pick isn’t a bad move, the team has other glaring needs — namely in the secondary. The more economical move would be to select a player like Godwin and groom him to fill the void left by the departed Woods. Godwin has the upside to potentially give a team like Buffalo that extra weapon to put the offense over the hump once he fully develops.

Similar to Buffalo, Denver has question marks at quarterback paired with little depth past its top two options at wide receiver. Demaryius Thomas and Emmanuel Sanders are top-flight players, but there’s little to be excited about looking past them. Second round pick and Indiana product Cody Latimer has been lackluster to say the least. Since being picked with the No. 56 pick in the 2014 NFL Draft, Latimer’s compiled merely 158 yards and a touchdown on just 16 catches. The Broncos might’ve whiffed on this one; Latimer was selected over Pro Bowlers Allen Robinson and Jarvis Landry who went just a few picks later.

Godwin could give the Broncos another viable option who could work in the slot and provide actual depth behind the talented duo — along with reliable hands and production. Godwin may receive plenty of praise for his skills catching and high-pointing the ball, but he’s just as reliable as a downfield blocker. Those are traits that get you drafted, and in Godwin’s case, should get him picked higher.

Godwin could be the perfect complement to former first round quarterback Paxton Lynch, who’s being groomed to eventually take over under center in the Mile High City. The former Penn State standout is the type of receiver you want to pair a project quarterback with early in his career; this could be a wise investment with the Broncos, and would come with little risk near the back half of the third round.

This one might not be as obvious a fit, but it makes sense. The Saints are loaded with talent young and old at the receiver position with former Ohio State standout Michael Thomas leading the charge. The star second-year man posted 92 catches for 1,137 yards and nine scores in his debut season, and with the slot work of Willie Snead IV paired with elder statesman Ted Ginn, one might assume the Saints have no reason to take a receiver that high in the draft.

But, the glaring omission from that list of pass-catchers is exactly why investing in Chris Godwin would be a wise one for an organization trying to optimize the final years of quarterback Drew Brees’ career. New Orleans sent star wideout Brandin Cooks to New England in a package that included the Patriots’ No. 32 overall pick in Thursday’s Draft. Though the team has the pieces in place to keep up pace, it’s simply impossible to replace the production left behind by Cooks. Godwin is the perfect depth addition at that point in the draft — especially considering his tremendous upside.

The Saints wouldn’t need Godwin to develop immediately, allowing him to grow in a receiver-friendly system playing with one of the best quarterbacks to ever play the game. Sounds like the optimal development recipe to me.

Check in Thursday as we analyze the top three destinations for defensive end Garrett Sickels.