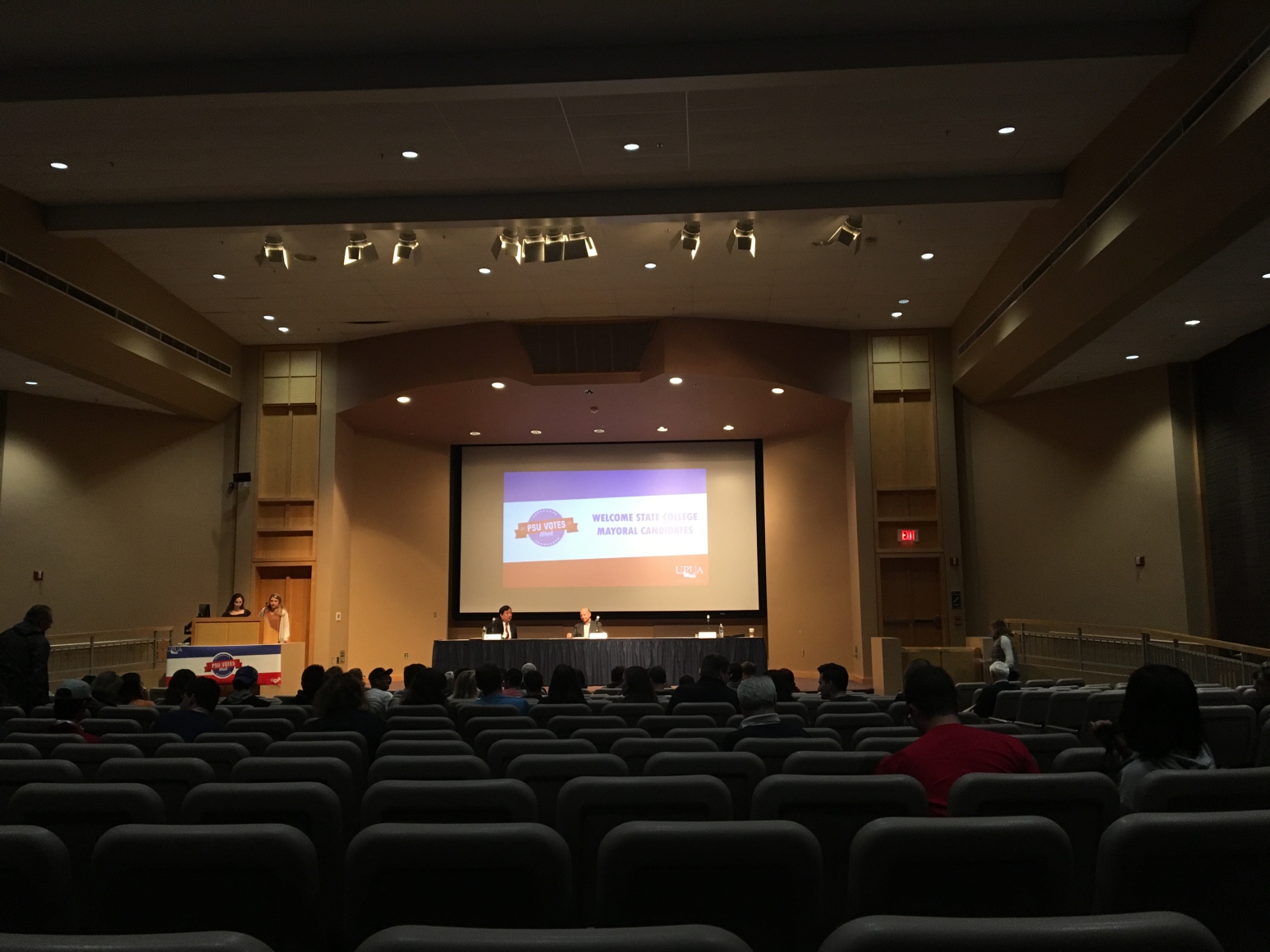 Follow along here for updates and analysis as the debate continues throughout the evening:

After the debate, UPUA encouraged attendees to pick up voter registration forms if they were not already registered. The deadline to register to vote in this year’s municipal election is October 10. Election Day is November 7.

The mayoral candidates are slated to appear in at least two more debates prior to the election as follows:

7-9 p.m. Tuesday, October 17 at the State Theatre (hosted by The Daily Collegian and the Centre Daily Times)

7-9 p.m. Wednesday, October 18 at the Borough Building (hosted by League of Women Voters)

Madrid: Says we need a capable mayor who has demonstrated positive leadership — he’s been chair of various Borough commissions, which is a position elected by peers. “I spent 20 years in the Marine Corps — that should say enough as far as my leadership ability.” Says his neighborhood block party was started by a woman who once had a student come into her house at 2 a.m., strip down, and shower in her 11-year-old daughter’s bedroom. “But she built bridges.”

Hahn: “I’m going to sound like a broken record yet again.” Says it’s important to stress communication between the Borough and surrounding municipalities to discuss issues of joint concern rather than waiting until a meeting to start yelling at each other. “I think that this is a great community…I think that you’ve made a wonderful choice to be part of the Penn State family.”

Black: “It’s really important for me to hear what matters to you…because we need to include every resident’s voice in who we are and who we want to be.” Invites attendees to call, text, or email him at [email protected] to chat and give input. “I am a democrat on the republican ticket. This is a nonpartisan position.”

What do you think of the relationship between students and the State College Borough?

Hahn: Recently went door-to-door in the Highlands neighborhood and was pleasantly surprised to see how welcoming the community is. Says all three candidates live within a few blocks or even closer of students and are cognizant this is a student-dominated community. “The key to preventing problems from becoming big problems is communication.”

Black: “We sometimes lose sight of the really close personal relationships.” Says it’s easier to hold on to the negative experiences, but there’s a lot we can do together to improve the overall relationship. “Engage one another. Invite one another to events.” Says residents want students to engage in the community and say hello. “I want you to knock on my door.”

Madrid: Relationship is good, but it can always be better. Uses State Patty’s Day as an example of dialogue improving disagreements.

What can you do to ensure safety for residents, students, and visitors alike?

Black: “Safety must be our number one priority for everyone in our community.” Says we must ensure we’re doing everything we can to ensure safety on a daily basis and in preparing to respond to incidents.

Madrid: Says the Mayor is actually the chief law enforcement officer in the Borough, according to state laws; claims more than 50% of vandalism and other crime downtown is committed by people who are not students at University Park. Cites importance of collaboration between safety and security and not too much light shining into residents’ windows.

Hahn: State College is already exceptionally safe. “More lighting, for example, is something that helps encourage foot traffic, and there are places in the Borough that I think can be safer.” Says it’s important to increase lighting on pathways downtown.

How can we attract students-turned-young professionals to remain in State College?

Madrid: Says this isn’t a Borough issue; it’s an issue of the employment opportunities in State College and of affordable housing. “This is a very complicated issue and a lot of words isn’t going to solve it.”

Hahn: “I think the issue is affordable housing.” Says it’s good to focus on expanding industry, including the State College airport, which is often someone’s first exposure to State College. “I think we need to leverage the resources that we have.”

Black: He himself put down roots in State College after coming here as a student. Says it’s important to support start-ups so they can be successful here. Emphasizes the necessity of affordable housing for young professionals in town.

What can be done to increase inclusivity in the State College Borough?

Hahn: Says he grew up as practically the only Asian-American at his school in State College. “The number of good people — welcoming people — vastly outnumber the people who hate.” Emphasizes the importance of reaching out to welcome those who have felt belittled or like outsiders.

Black: “One thing that we can do is to open ourselves up and get to know each other.” Says he leads by example by opening his studio to arts and cultural events for everyone — inclusivity is a lifestyle, not just for meetings.

Madrid: Our diversity is a strength, not a challenge. “We are many voices, but still one community.”

What is the greatest challenge currently facing the State College Borough and how will you overcome it if elected?

Madrid: There’s a perception by many members of the community that they aren’t being treated fairly. Says BugPAC was formed because Mayor Elizabeth Goreham couldn’t appropriately manage the meetings. “I will not let council members talk down to any member of the community who is testifying before council.”

Hahn: Disrespectful communications between students and non-students. “When there are parties to be held, talk to the neighbors — maybe invite them. At the very least, reach out to them and say ‘This is our contact person. If you’re having problems, contact them before you contact the police.'” Says a lot of problems can be solved through better communication.

Michael Black: “When you see me up here…you’re seeing a representation of the community.” Says his supporters represent a broad spectrum, from K-12 to undergrads to graduate students to long-term residents. Black came to Penn State as a student and loved his time here, including an experience as the Nittany Lion for one home women’s volleyball game. “I want State College to be even more attractive, more vibrant, and more welcoming.”

Ron Madrid: Says we need a mayor who can bring the community together, not focus on differences. Madrid explains the role of mayor is to run meetings and to represent everyone in the Borough. “As an independent, I have no party allegiance. My only allegiance is to you — all residents of the Borough.”

Don Hahn: “When I served as Council President, State College was ranked the third best college town for students.” During his time on Borough Council, a student representative was added. He’s in favor of adding student representatives to the Borough’s various commissions on transportation, planning, etc. “If I’m elected mayor, I’ll try to host four meetings/year at which Borough Council members and student leaders will be invited to discuss issues to help with communication.” Says State College is a great place to live and he’s hoping to keep it that way.