Penn State students showed out in full force at Monday’s Borough Council meeting to oppose enforcing a ban on overnight parking in the borough during event weekends — but to no avail. Council approved a plan 7-2 that will move staff forward with a temporary on-street parking pilot program only in the Highlands neighborhood.

Council has spent its past few meetings largely discussing overnight parking, but the original proposal from the Highlands Civic Association was presented about a year ago. Although it is codified that many streets and areas of the borough ban parking between 2 and 6 a.m., these restrictions have traditionally been relaxed for special events like home football weekends and Arts Fest. That will likely no longer be the case if this pilot program is successful.

State College Parking Manager Rick Ward presented the proposal that staff prepared this week at the request of Council after a straw vote at last week’s work session. Here are the highlights from an extremely hard-to-read PowerPoint: 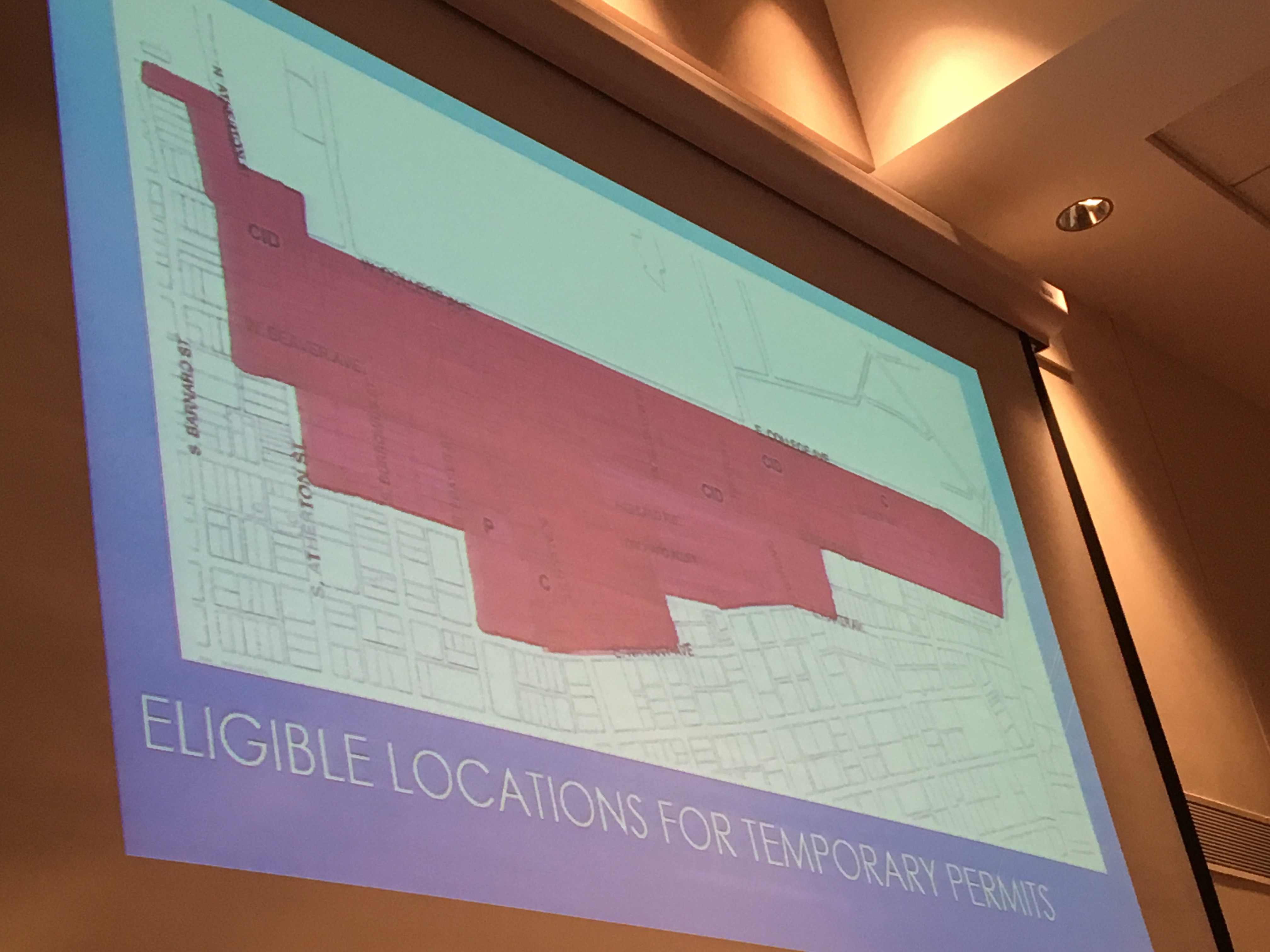 How Much Permits Cost

“If you allowed a large number of free permits, it kind of defeats the purpose of having any kind of overnight restrictions,” Ward said. If the numbers 24 and 60 seem arbitrary, it’s probably because they are. Isn’t bureaucracy charming?

HOWEVER, the permits as described above cannot be used during special event weekends and blackout dates, including home football weekends and Arts Fest. For these weekends:

Borough Staff estimates this program could bring in $75,000 to $100,000 in revenue, but most of this will go to increased staffing and informational technology costs. Each permit will cost about $1 and the Borough will also need to fund a one-time cost for updating the 2 a.m. to 6 a.m. signage at approximately $18 per sign. They aren’t sure right now how many signs there are. The plan also includes an option to survey residents on what they’d like to do about overnight parking with an approximate cost of $1,200 mostly in mailings.

“We will have to answer a lot of questions about this program if it’s adopted, and we need staff to be prepared to do that,” Ward added.

Notably, the proposal also does not allow any lawn parking at any time for any borough residents.

Councilwoman Cathy Dauler moved to approve the proposal as outlined, and Council President Evan Myers was quick to voice his opposition to approving the proposal. Myers added that, if anything, the pilot program should be restricted to only the Highlands neighborhood, where the original proposal to change current practice originated.

Councilman Dan Murphy emphasized members of Borough Council received the full proposal only about 15 minutes before Monday’s meeting after a week of staff preparation, despite the Transportation Commission spending months to collect data and provide a report on the matter. He urged Council to spend more time to consider the potential impacts of the decision before voting.

“It is no big deal, and it doesn’t warrant all the overreaction and exaggeration and distortion of what we’re trying to do,” Councilman David Brown said, explaining he could “live with” a pilot program only to be done in the Highlands neighborhood, but calling the discussion surround the issue “melodramatic.”

“We could tear [our lawn] up and put up an impervious surface, but I don’t really think you want people to do that, putting in additional gravel or asphalt areas just because they need to find additional parking,” a fraternity advisor said, adding that allowing apartments to register for permits based on the individual units is discriminatory against fraternities, which may have 50 or 60 brothers living in one house.

Many of those who spoke brought up the issue of drunk driving if those parked in the Borough would be required to move their cars at 2 a.m., but Highlands resident David Stone refuted this and said data shows there would be no increase in drunk driving. Another resident brought up the cost of living downtown and his issues with adding this type of permit on top of an already-expensive mortgage or rent rate.

Outgoing Graduate and Professional Student Association President Matt Krott echoed similar sentiments, describing his own response just minutes before that “it doesn’t matter” when someone asked if he was going to speak at the meeting. “I hope that I’m wrong, and maybe that was overly-cynical of me,” Krott said.

Only one Highlands resident presented at this meeting in favor of the full proposal, and another resident spoke in favor of the proposal with the amendment limiting the pilot program to the Highlands neighborhood. “I think presenting this as anti-student is a divisive narrative,” longtime resident Eric White said. Other Highlands residents and Civic Association members have spoken at previous meetings discussing the same topic.

Members of council brought up anecdotes of their friends and neighbors having their driveways parked in, but Myers said these issues aren’t exclusive to overnight parking.

An original amendment to pilot the program in only the Highlands neighborhood failed 3-4, but after a five-minute recess that truly saved us all, a reconsideration passed 4-3.

It wouldn’t be a Borough Council meeting without a good old fashioned public rant. Councilwoman Theresa Lafer berated those who spoke (mostly students) about their attitudes and that they had the audacity to create a petition about overnight parking.

“How many of you are really gonna use your parking permit — $10 — 60 times in one year? Are you inviting your whole hometown to every game?” she asked rhetorically, adding many of the arguments against the proposal that she heard were either lazy, misinformed, or both. “I do not think this was a good argument and a good place to put this much effort.”

The proposal as amended passed 5-2, with Myers and Murphy in opposition. Staff will now move forward with codifying the program as outlined above into an ordinance, which would then require Council approval. The program would likely take effect October 1.

Follow along here for updates, pictures, videos, and more from the 48th annual THON

Now that you’ve had more than a few chances to learn the line dance, we thought we’d have you share some of your favorite moves from this year’s song.

Dancers Stand for 46: Why The Arbitrary Number?

While You Were Sleeping: What Happened At THON 2020 Overnight

Dancers Stand for 46: Why The Arbitrary Number?