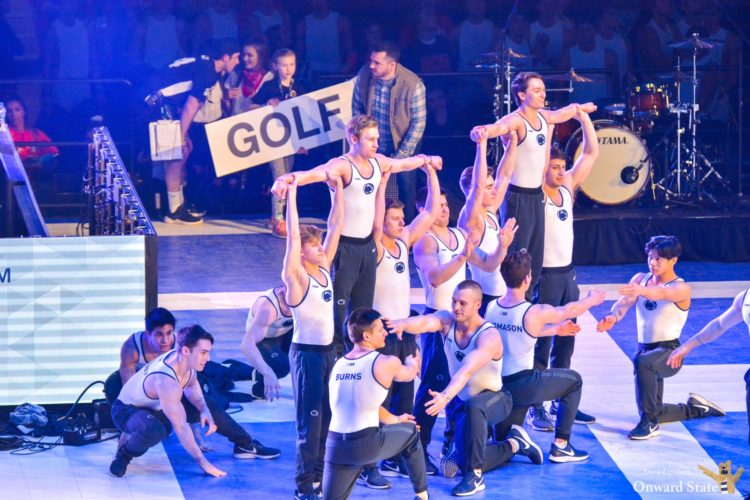 Penn State men’s gymnastics sealed itself in Pep Rally history as the first team to three-peat as champions in the competition’s current format this past decade.

In a year of the flip, when just about every group took a page from defending champs and used some sort of flip in their routines, the originals still dominated. The first-ever White Out crowd for a Pep Rally witnessed the gymnasts destroy the football team in the final round of the competition.

Women’s gymnastics kicked it off with a sleek, well choreographed hip-hop performance.

Men’s soccer took some notes from defending champs men’s gymnastics and added some acrobatics to their routine. (Side note: That may be the most clothes we’ve ever seen men’s soccer wear in a Pep Rally, and they were just in shorts and tanks).

Field hockey went all out on Lady Gaga.

Men’s rugby had some technical difficulties getting into its set. But once it started, it had flair to it — building on the idea that all you need is some solid pop songs and some flips to put on a crowdpleaser.

Women’s fencing rallied with with just six on stage, but paired up for a solid mix-and-match routine that included hits like “Lip Gloss” and “Stanky Legg.”

The dynasty took the stage in the middle of the competition and by the crowd reaction, it seemed over just seconds into the routine. The gymnasts did their usual acrobatics, and felt so confident in victory, they even slipped in some country with “Footloose.”

Generations of Beyonce songs — even back to Destiny’s Child days — and fantastic moves built the women’s golf routine, which did well coming after a very tough act to follow.

Men’s swimming and diving got a huge ovation from the crowd with a creative routine that even included some air swimming. Hey, do what you know and you might score high.

Women’s soccer took to the stage and grooved to a handful of 2000s women’s power anthems like “Upgrade U” and “Hollaback Girl.” The floof was there, but it looked like it missed out on the dance moves to please the fans.

To succeed in figure skating, you got to have the triple axel. To succeed in pep rally, you’ve got to have a flip, and mixed into this women’s rugby’s routine was a choreographed line flip.

Men’s fencing ain’t saying she’s a gold digger, but its breakdancing showed it wasn’t missing with any broke folk.

Women’s lacrosse opened Panzer Stadium earlier Saturday with a win. It also impressed at the Pep Rally with some latin-vibe music and Fortnite dance moves — caping it off with, you guessed it, a flip.

Men’s tennis rocked the crowd with a multi-person worm (historic) and also added in Fortnite moves to cap off an intriguing set.

At some point, you have to think there’s a set number of songs these teams can choose from. It also kicked things off with “Lip Gloss,” but then women’s swimming and diving moved into other 2000s hits intertwined with very in-sync (if not kind of boring) choreography.

Kanye-style pants for a Kanye-infused performance: Men’s golf led off with “Good Life” then gave the fans some other hip-hop classics and flex-flung dollar bills.

Women’s ice hockey kicked off with some jumproping Corbin Bleu style, then flew threw the air and did a pretty in-sync roller coaster with “Mambo No. 5” blaring in the background.

The final two performances of the preliminary round were all over the place, but possibly the most creatively exciting of the night.

The football performance had some hip-hop, a little “Bye Bye Bye” from *NSYNC, and acts thrown into the routine. It turned into a water social by the end of the performance, with players spraying bottles into the air.

Women’s volleyball opened with the SpongeBob intro, had a Frozone appearance from the Incredibles, and left the crowd wanting more with Lizzie McGuire’s “Hey Now” blasting for the whole BJC. Kendall White stole the show as the frontwoman, but it wouldn’t be enough to make the final.

Like we predicted: the final showdown would come down to men’s gymnastics and football. Each had three titles this decade, more than anyone else. For the fourth-straight year, the title would belong to one of those two.

After the two put on their routines one last time, we went back to the judges and the crowd.

The final decision was virtually unanimous — the Bryce Jordan Center roof almost burst off when they asked the crowd for the winner.