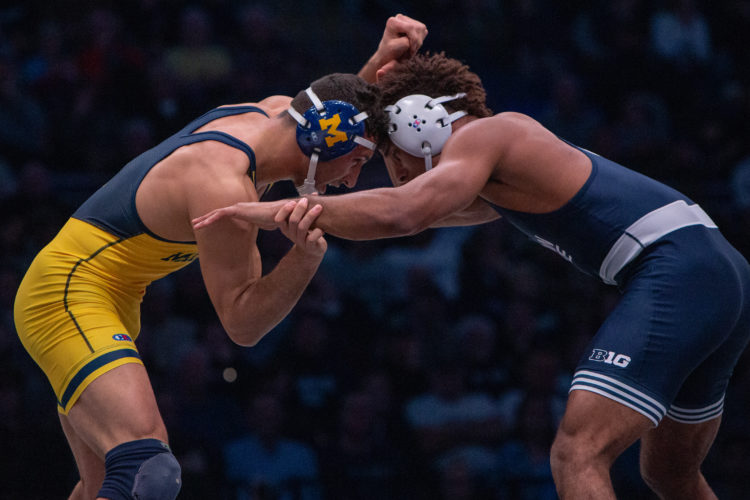 Penn State wrestling enters Friday night of the NCAA Championships with a comfortable lead over second-place Ohio State and threatening to do even more damage to the field. Six Nittany Lions have already earned All-American status and will wrestle in semifinals.

Four of those semifinal match-ups will feature wrestlers facing an opponent they have some degree of history against in a drama-charged round.

Lee and McKenna have made for some great wrestling during the last two seasons with each match-up being decided by one point.

McKenna won their meeting during last season’s dual off a riding time point. Lee took their match during this season’s dual with a big third period where he wore down McKenna and scored two takedowns and an escape. However, McKenna bounced back with a win in the conference semifinals when he held off a late comeback attempt from Lee.

They’ll cross paths again tonight in a setting similar to their last meeting with a trip to the finals at stake. Should Lee knock off McKenna once again, he’d all but kill any chance of Ohio State coming back into the team race.

With two tech falls and a pin, Nolf has been on fire through his first three matches. Although Hidlay is a returning finalist, if his performance this weekend is any indication, Nolf likely won’t have any issue advancing to the finals for a fourth year in a row

Another semi-final match-up to watch tonight will be No. 1 Mark Hall matching up with No. 4 Myles Amine of Michigan at 174 lbs. Although Hall is 4-0 against Amine in college, each bout has been too close for comfort with Hall winning by a point each time out.

Tonight will be the third time this season the two conference foes meet. Hall has held the upper hand traditionally and seems to be at his best in tight, low-scoring matches, so beating Amine a fifth time in a row shouldn’t prove to be much of an issue. However, whether it’s hands-to-the-face or a no-call takedown, wrestling so closely runs its risks — as Hall saw firsthand on this stage two years ago against Zahid Valencia of Arizona State in the semifinals.

The semifinals will conclude with one of the most heavily anticipated match-ups of the entire tournament. We’ve been counting down to this one since the Big Ten Championships when No. 2 Anthony Cassar pulled out a narrow win over No. 3 Gable Steveson in the title bout. Cassar signaled to the crowd to calm down after one

After his loss to Cassar, the first of his career, Steveson has been on a collision course to the finals, running through everything in his way during this tournament, winning by major decision twice and tech fall once.

Penn State’s other two semifinal match-ups are No. 2 Vincenzo Joseph against No. 3 Joshua Shields of Arizona State at 165 lbs. and No. 1 Bo Nickal against No. 4 Patrick Brucki of Princeton.

Share via
NCAA Championships Semifinals Marked By Rematches For Penn State Wrestling
https://onwardstate.com/2019/03/22/ncaa-championships-semifinals-marked-by-rematches-for-penn-state-wrestling/
Follow @onwardstate
Send this to a friend