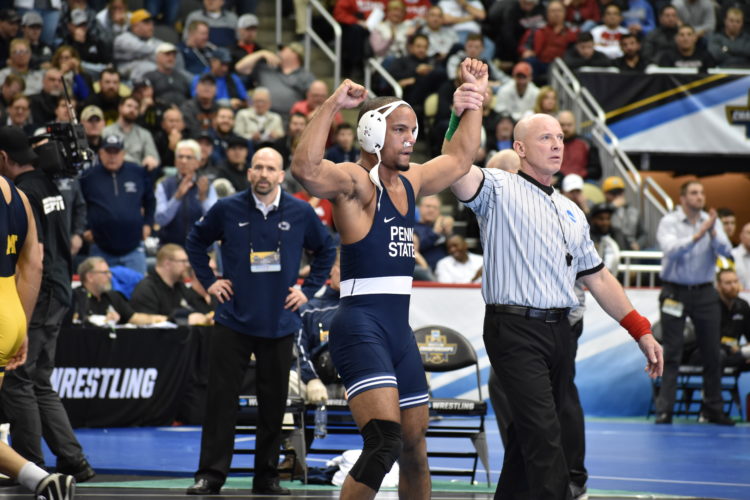 The semifinals and blood round of the NCAA Championship were more of the same for Penn State wrestling. The Nittany Lions went 6-2 in the session and blew the doors off the team race.

After two days, the Nittany Lions have 120.5 points, commandingly ahead of second-place Ohio State, which has 88.5. With the big lead, Penn State seems primed to clinch its eighth national title in nine years during the first matches on Saturday.

Five Nittany Lions won their semifinal matches, making this fourth year in a row Penn State will have three finalists.

The only Nittany Lion to wrestle in the blood round, No. 10 Roman Bravo-Young got the session off to an exciting start for Penn State. He knocked off No. 4 Micky Phillippi of Pitt to become a true freshman All-American and the seventh from Penn State this tournament.

While down 1-0 in the second period, Bravo-Young caught Phillippi by his leg at the edge and pulled him back in bounds to throw him to the mat and take a 2-1 lead. Phillippi quickly escaped to tie it 2-2, but Bravo-Young added on one more takedown to close out the period. The takedown proved to be the difference in the bout, as he won 4-3.

No. 2 Nick Lee met up with No. 3 Joey McKenna for the third time this season in the 141-lb. semifinals. McKenna led Lee 3-1 in the third period but an escape and stall call against him tied the score up with five seconds to wrestle. Unfortunately for Lee, McKenna had already clinched a riding time point. He held on for the narrow 4-3 decision

Lee and McKenna have met four times in the last two seasons. All of them have been decided by one point, including two on a riding time point. Of those four match-ups, Lee found himself on the losing end of three. He’ll be back in action Saturday morning and needs to two more times to take third place.

With the help of a little luck and a fast clock, No. 1 Jason Nolf survived an upset attempt from No. 5 Hayden Hidlay at 157 lbs. He won 3-2 to advance to the NCAA Finals.

In the last 15 seconds of the first period, Nolf and Hidlay were caught in a scramble that appeared to result in a takedown by Hidlay as called on the mat. A drawn-out official review reversed the call, taking Hidlay’s two points off the board.

The bout went to the second period scoreless before Nolf got to work. He quickly escaped and took Hidlay down to go up 3-1 before cutting him loose. After a Hidlay escaped, Nolf held onto a 3-2 lead until he danced with the devil one final time. Hidlay once again appeared to take down Nolf, sending PPG Paints Arena into pandemonium, but he couldn’t complete the shot attempt in time. An NC State challenge was unsuccessful at overturning the call, solidifying a too-close-for-comfort win for Nolf.

Nolf’s win makes him the second four-time national finalist in Penn State history, following in the footsteps of David Taylor. That list would get a bit longer later in the session…

No. 2 Vincenzo Joseph got the 165-lb. semifinals against No. 3 Joshua Shields off to a fast start with a takedown seconds into the bout. He never looked back from there en route to a 3-2 decision that sent him to the finals for the third year in a row.

At 174 lbs., seven minutes wasn’t enough to decide the outcome between No. 1 Mark Hall and No. 4 Myles Amine of Michigan. The two were tied 1-1 at the end of regulation and remained tied after one minute of sudden victory. In the first overtime period, Hall quickly escaped to go up 2-1. He held onto that lead during the second period when he rode out Amine and managed to break him down twice on the edge.

Hall’s secured his third trip to the finals where he’ll hope to avenge his inly loss of the last two seasons against No. 3 Zahid Valencia of Arizona State. Interestingly, like Lee and McKenna, every time Hall and Amine have wrestled, the bout’s been decided by one point, with Hall winning each time. Friday night was the third time this season and fifth time overall he routed the Wolverine

While Hall was pulling out another semifinal win, Bravo-Young met No. 8 John Erneste in the consolation quarters and fell 10-0. He’ll wrestle for seventh place Saturday morning.

No. 1 Bo Nickal cruised into the 197-lb. finals with a fall over No. 4 Patrick Brucki of Princeton. He pinned Brucki late in the second period to clinch his fourth finals berth. He joins Nolf and Taylor on the exclusive list of four-time finalists from Penn State.

Speaking of Nolf, Nickal’s fall was the 59th of his career and put him one behind Nolf for the program lead. The two will have a chance to settle the season-long competition four years in the making in their final bouts on Saturday night.

No. 2 Anthony Cassar met No. 3 Gable Steveson of Minnesota in a rematch of the Big Ten Championships finals. Steveson took an early 1-0 lead off a stall warning and stall call against Cassar in the first period. That lead grew to 2-0 at the start of the third period following a Steveson escape.

Cassar however launched his comeback attempt with a third period escape and takedown to go up 3-1. He rode Steveson for nearly an entire minute to secure a riding time point, which proved to be the difference-maker. He beat Steveson 4-3 to punch his ticket to the finals and continue his dream season.

Share via
Penn State Wrestling With Five Finalists At NCAA Championships
https://onwardstate.com/2019/03/22/penn-state-wrestling-with-five-finalists-at-ncaa-championships/
Follow @onwardstate
Send this to a friend