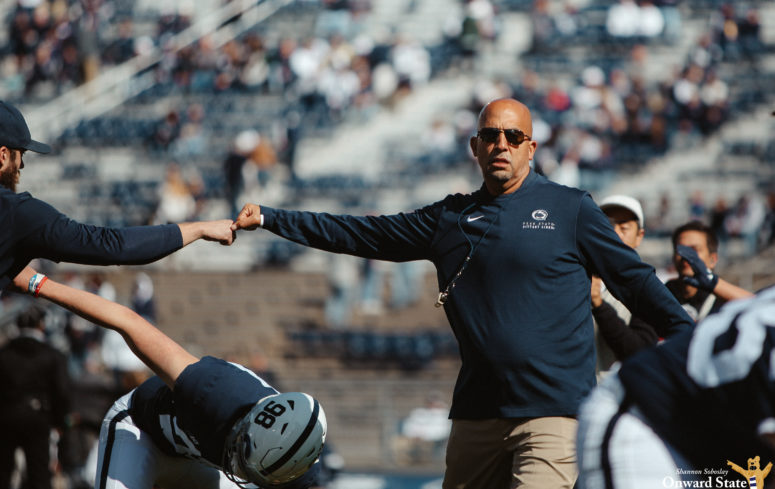 Penn State football’s episode of “24/7 College Football” made its triumphant debut on Wednesday night, and it provided an overall excellent glimpse behind the scenes of James Franklin’s program.

From the closeness of Sean Spencer’s Wild Dogs to strength and conditioning coach Dwight Galt taking his shirt off after practice to James Franklin’s family life, there was a lot to unpack from the episode. Going in, everybody knew the ending — a 35-7 victory over Purdue on Homecoming weekend — but what else did the episode feature?

Here are our takeaways from Penn State’s 51 minutes in the national spotlight.

Family is clearly one of the most important aspects of James Franklin’s life, so it wasn’t too surprising to see the head coach’s wife and two daughters, Shola and Addy, chronicled on the Thursday night before the game.

“I understand the impact [being Penn State’s head football coach] has on my kids and my wife,” Franklin said. “There’s a lot of dads that spend a lot of time at home, but they’re not connected. They’re distant or distracted or whatever it may be. The time we get together — whether it’s on vacation or during a normal week — we have a lot of fun. [Shola and Addy] are always telling me stories about their day and how that went.”

Being distracted, distant, or not connected clearly isn’t a problem for James Franklin. He was clearly and fully engaged in his daughters’ stories from their days and their predictions for last weekend’s Iowa-Michigan game.

This segment was honestly my favorite of the entire episode. A typical Franklin family tradition on Thursday nights isn’t anything overly spectacular — snuggling up on the couch and watching football together. Although the significance of this time isn’t directly stated, it definitely isn’t lost on anyone.

The scene featuring every coach bringing their wives and kids to a team dinner after a long Monday filled with meetings, film study, and game-planning was also awesome. It showcased Franklin interacting with his colleagues’ children in addition to his two daughters.

“Families, staff, players — there’s a closeness here. I’ve worked for men who didn’t know my wife’s first name,” defensive coordinator Brent Pry added. “When you work for a man who has your family’s best interests at heart, that means a lot.”

At the end of the day, James Franklin’s very public life as head coach of a top-10 football program is all most people really get to see. Watching him just be a dad — even if it was just for a few hours on a Thursday before a football game — was refreshing to see.

Penn State Football Has So Much Damn Fun

Sixty-two-year-old strength and conditioning coach Dwight Galt III celebrated the team’s great Tuesday practice by taking off his shirt and showing off his dad-bod. Student assistant Sam Finkel wore sunglasses and danced around the Nittany Lions’ meeting room in front of the entire team before jokingly being told to “go photo-copy some shit” by head coach James Franklin, who had an ear-to-ear smile on his face.

Some of this stuff might rub you the wrong way, but I honestly don’t care — and neither does Penn State. There’s a simple truth about this year’s Nittany Lions: they love to have fun, and they don’t care who knows it.

To be fair, this episode would’ve looked and felt a lot different if Penn State hadn’t just trounced Maryland 59-0. However, that’s a hypothetical we don’t need to worry about. There is so much positive energy around this team, and that’ll show up on Saturdays in the form of unbridled confidence from every player wearing Penn State’s trademark blue and white.

Although there was lots of fun to be had on Wednesday’s HBO episode, Penn State is clearly able to maintain its laser focus when needed. One crystal-clear example of this was the team’s Friday practice.

Franklin and his assistants are the only people allowed to speak during Friday practices. The players clearly bought into Franklin’s objective, which is to maximize the team’s concentration during this crucially important final tune-up for Saturday. They were laser-focused on mastering the weekend’s game-plan.

“On Friday, I want to make sure everyone’s completely locked in,” Franklin said. “No talking — echoing the situation so we’re all on the same page. We come out and we do every situation that may come off in the game. How you prepare all week is going to help you be confident on Saturdays.”

Penn State’s Friday routine is a stark contrast from Florida’s, which was chronicled on the first episode of “24/7 College Football.” The Gators play flag football and have a much more relaxed practice on Fridays.

The closeness and bond among Penn State’s defensive linemen was chronicled quite a bit throughout the episode of “24/7 College Football,” and it was a refreshing change of pace.

Position coach Sean Spencer was introduced in the most badass possible fashion by riding his motorcycle on his commute to work. The narrative quickly shifted to the closeness of the players he coaches, which was on full display during a Wild Dog dinner at The Field in State College.

The climax of the Wild Dogs’ narrative took place on the Friday night before the game. In one final team meeting, the Nittany Lions’ defensive linemen took part in one of their most sacred traditions. Each Wild Dog picks out the dog tag of the teammate they’ll play for that weekend.

Shaka Toney discussed this tradition following Penn State’s 35-7 win over Purdue, and Spencer also took some time to remind his players of their bond at the end of this meeting.

“This is what it’s all about — the brotherhood in this room,” Spencer said. “It doesn’t matter what the damn game-plan says — it doesn’t — because if you don’t fight for each other, we have nothing. What we have in this room is special, and you got to believe in each other every time you go out.”

Out-Of-Context Line Of The Show

Share via
Takeaways From Penn State Football\'s Episode Of HBO\'s \'24/7 College Football\'
https://onwardstate.com/2019/10/10/takeaways-from-penn-state-footballs-episode-of-hbos-24-7-college-football/
Follow @onwardstate
Send this to a friend