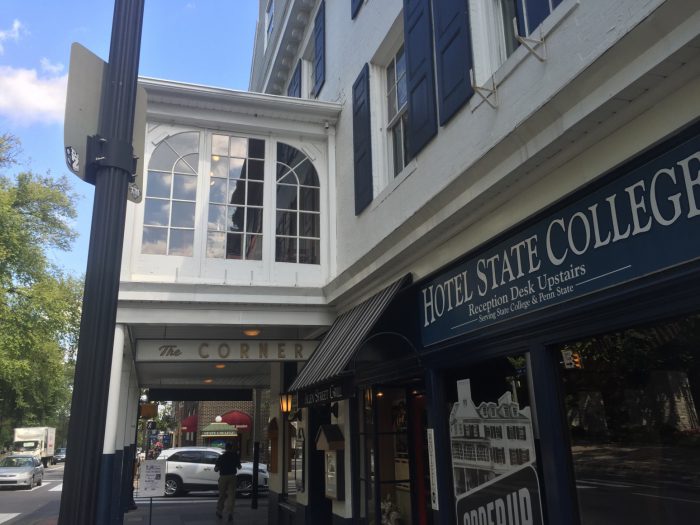 Nearly six months after it went on the market, Hotel State College & Company, with its seven entities, is in the final stages of being purchased by Pat Croce and Company, a hospitality company founded by the former Philadelphia 76ers president and part owner.

Hotel State College & Company is comprised of the Corner Room, Pickle’s, Zeno’s Pub, the Basement Nightspot, Chumley’s, and Hotel State College, all iconic businesses located on the corner of College and Allen. The entire business was listed for sale for $2.5 million this summer. Although the building won’t change hands, reports over the summer indicated any sale would include the liquor license as well as all furniture, fixtures, and equipment with the building.

“These alumni value the history and traditions of Happy Valley and are looking forward to getting back to their alma mater,” said Curtis Shulman, director of operations for Hotel State College. “I am excited for our businesses, our brands and our community.”

Shulman said he will continue in the same role after the sale goes through.

The sale hasn’t gone through officially, as both sides are in the final agreement stage and working out various semantics in the deal. A public notice of an application for a liquor license was spotted in the window of the Corner Room Wednesday night. It detailed the transfer of a liquor license from Hotel State College & Company Inc. to Hotel S.C., LLC, which the business will operate under moving forward.

Croce served as the 76ers president from 1996 to 2001. Since resigning, he’s has dabbled in television, book-writing, and hospitality. His company, Pat Croce and Company, owns an assortment of bars, restaurants, and museums throughout Florida in the Key West and St. Augustine areas.

Pat Croce himself is a Pitt graduate, but his son Michael, who is the president of the company, graduated in 2004. CEO Jeff Sorg, who’s also Croce’s son-in-law, is an alum as well, in addition to his wife Kelly, Croce’s daughter.

The Corner Room’s building itself opened in 1855 as Jack’s Roadhouse, and its location on the corner of Allen Street and College Ave. is one of the most iconic and recognizable symbols in downtown State College.

In recent years, the property’s facilities have undergone a few changes. Pickle’s added a small deck to provide customers with outdoor seating during the spring and summer in August 2017, and Indigo closed operations and rebranded as the Basement Nightspot last year.

Neither Pat nor Michael Croce immediately responded to requests for comment.