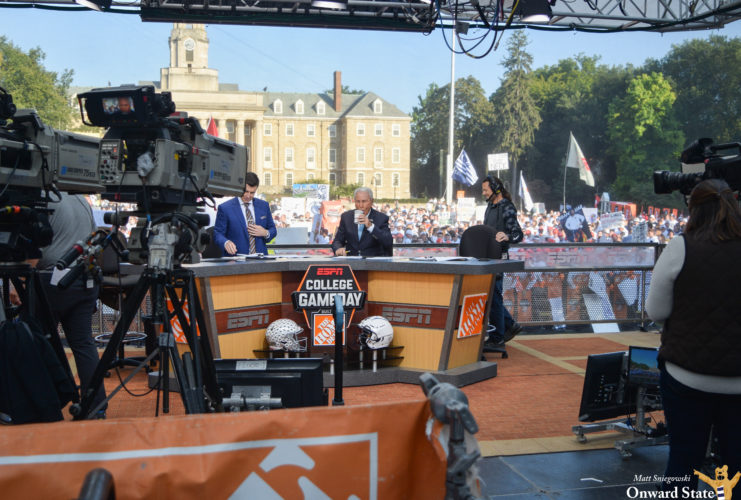 College GameDay is coming back to our city, folks!

ESPN announced Saturday night that its flagship morning show will air live from Happy Valley ahead of No. 8 Penn State football’s clash with No. 5 Ohio State on Halloween.

This will be the fourth straight year College GameDay comes to Penn State in recent history. The GameDay crew famously returned to Happy Valley for the first time in eight years ahead of the 2017 White Out game and stuck around for the 2018 and 2019 White Outs, too.

Next weekend will be Penn State’s 22nd overall appearance on the show and its ninth time hosting.

Kirk Herbstreit and the fellas will broadcast live from Beaver Stadium throughout the show. College GameDay set up shop on Old Main Lawn in 2017 and 2018 and moved to the HUB Lawn in 2019.

Fans and students won’t be allowed to hang around the set due to coronavirus mitigation protocols. However, they can register online to join GameDay’s virtual pit and share their homemade signs using #gamedaysigns to potentially be featured on TV and social media.

The pregame show will begin at 9 a.m. and air until noon. GameDay always culminates with the great Lee Corso making his pick for the featured game by whipping out the headgear of who he thinks will win, and he’s picked Penn State during each of the crew’s last three visits.

Last year, the GameDay crew saw then-No. 7 Penn State took down then-No. 16 Michigan under the Beaver Stadium lights to improve to 7-0 on the season. Wide receiver KJ Hamler impressed with 108 yards and two touchdowns on six receptions, while an unstoppable White Out crowd forced the Wolverines to burn timeouts and stay on their toes all game long.