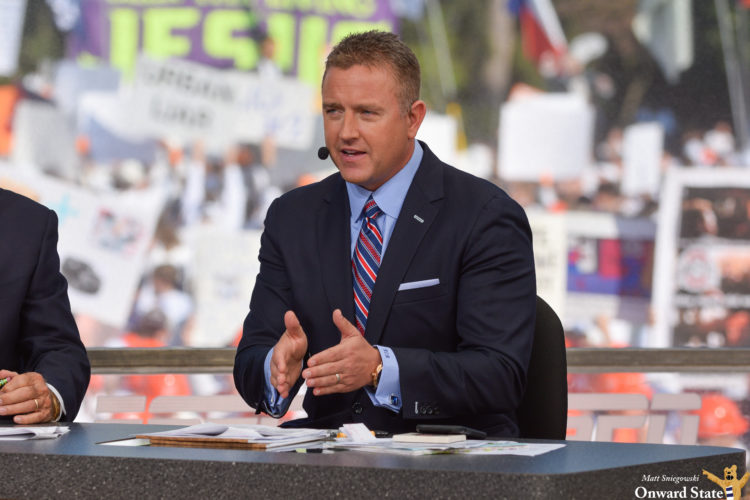 All week long, we’ve heard Penn State and Iowa fans go back on forth on accusations of faking injuries and booing student-athletes. We even saw hell freeze over when Pitt coach Pat Narduzzi took James Franklin’s side. However, College GameDay’s hosts and analysts don’t seem too inclined to take a side.

“Taking a dive to slow down Iowa is sort of like putting out glue boards to slow down a three-toed sloth,” Davis said during the show. “I mean, could you even really tell the difference?”

Against Penn State, Iowa posted just a 33% offensive success rate, which wound up as the nation’s 11th worst last weekend, according to ESPN. The Hawkeyes’ huddle-up offense didn’t indicate much of a high-tempo attack, either.

Davis noted that both Ferentz and Franklin are buying into “different truths” following the game. Although he said slowing down Iowa isn’t very necessary, Davis noted some Penn State injuries did happen to follow some big gains.

Franklin estimated that 70% of his injured players didn’t return to the game, and captain and defensive tackle PJ Mustipher had his season ended after going down on the Hawkeyes’ fifth play of the game.

“It’s like when kids talk trash — that’s one thing,” Pollack said. “But coaches don’t come in and talk trash to kids.”

Now a week removed from Penn State and Iowa’s clash, it certainly feels like time to move on, especially considering there’ll never be a definitive “winner” of this kind of argument. It’s possible these two teams could meet again to vie for a Big Ten title, though, but Penn State would likely need to run the table and win its remaining six games. Either way, it feels like there’s a rivalry brewing between these programs.