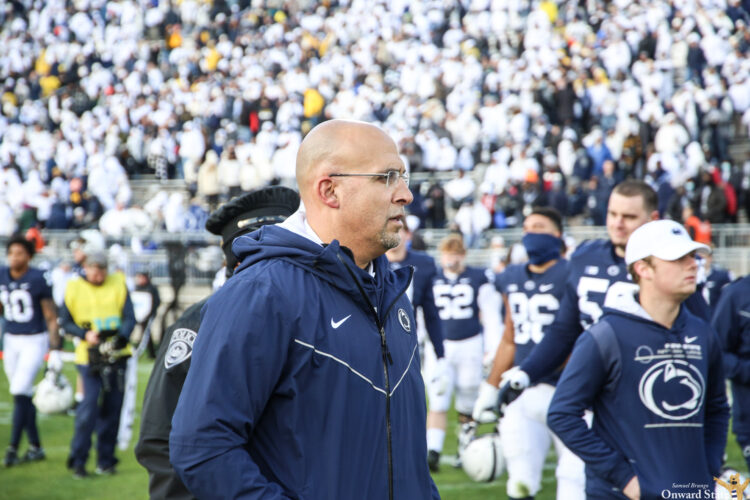 If there were any questions left about Penn State’s commitment to James Franklin (and vice versa), they were put to bed Tuesday afternoon.

The head coach agreed to a deal that will keep him in Happy Valley through 2031. The new contract gives Franklin a $7 million salary each year with no base pay increases, plus an annual $500,000 retention bonus.

Financially, this isn’t a massive jump for the Langhorne, Pa. native. Franklin will make $3.5 million more in base pay over the next four years than he would’ve in his previous deal, which he agreed to a little less than two years ago. However, that last contract only had Franklin coaching at Penn State through 2025. This new deal offers a significant jump in longevity and overall security for the head coach.

Along with that, Franklin’s new agent Jimmy Sexton is clearly doing his job well.

Now wrapping up his eighth season in Happy Valley, Franklin has all of the leverage under this new contract. His buyout opens at $12 million but only drops from there, and by 2026, he’ll be able to walk away from Penn State for the “cheap” price of $1 million. Meanwhile, if the university decides it wants to relieve Franklin of his services, it’ll be forced to pay him his base pay, supplemental pay, and life insurance loan, all multiplied by the years left on his deal.

It was the right decision to extend Franklin. The Nittany Lions are in no need of an upheaval of their coaching staff, Franklin is a great recruiter, and any possible replacements at the moment would likely be nowhere near his caliber. However, even with all of those positives in mind, it’s understandable to have questions about such an aggressive show of commitment on Penn State’s end.

Franklin has taken the Nittany Lions to three New Year’s Six bowls, won a Big Ten Championship, and is about to bring in one of the top recruiting classes in the country.

That’s all fantastic, but let’s take a look at what he’s done since he signed his last extension on December 6, 2019:

Penn State’s strange COVID-19-impacted season affects all of that, along with an injury to Sean Clifford that largely derailed this current campaign. But even still, that resume isn’t necessarily a ringing endorsement for Penn State to lock itself into a massive deal with the head coach.

In a statement that came along with the announcement Tuesday afternoon, Franklin expanded on a laundry list of goals he has for the program over the next decade. Those include facility improvements, technology upgrades, recruiting initiatives, and much more.

The head coach has a clear vision for what he wants to accomplish here, and all eyes will be on him as he tries to do it. Hypotheticals and plans are all well and good, but now with a real commitment behind him, it’s time for Franklin to back up the talk and lead the charge on these goals.

With stud quarterback prospect Drew Allar waiting in the wings and other top prospects in the Class of 2022, the future is seemingly bright for the program. Either way, though, the time for Franklin to prove he’s worthy of such a strong commitment starts this weekend with the Nittany Lions’ road game against No. 12 Michigan State. In some eyes, that contest could be the difference between a tough, injury-filled season that Franklin and his team managed to battle through or a step back toward 2014 and 2015.

Franklin and his coaching staff deserve to prove it can make Penn State an elite program, and Sandy Barbour is clearly making a huge investment into that. If it doesn’t go as planned in the first few years, the university doesn’t have a very clear exit strategy. However, Franklin and his team clearly have the tools necessary to make the Nittany Lions a top-tier college football team.

The last two seasons haven’t been up to the standard that the head coach has set, but Franklin now has a clear opportunity to prove they were, in fact, outliers. With this massive commitment from the university in tow, Franklin has no more excuses on his quest to win big with Penn State.

Share via
With Penn State\'s Massive Commitment In Hand, It\'s Time For James Franklin To Win
https://onwardstate.com/2021/11/24/with-penn-states-massive-commitment-in-hand-its-time-for-james-franklin-to-win/
Follow @onwardstate
Send this to a friend