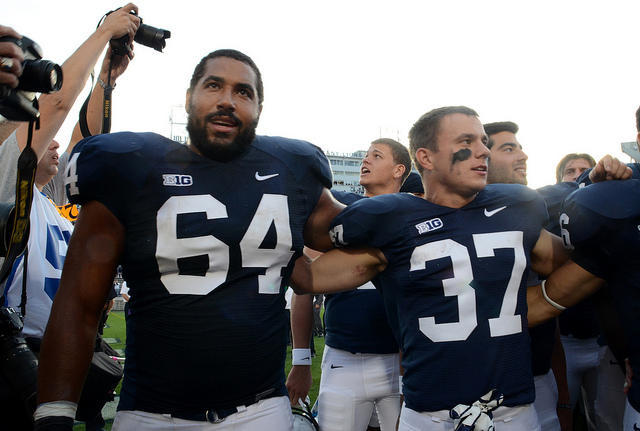 There’s a reason Penn State offensive guard John Urschel’s twitter handle is @mathmeetsfball. The Academic All-American carries a 4.0 GPA into graduate school and also serves as the starting right guard on the Penn State football team. Do you know anything about Instabilities in the Sun-Jupiter-Asteroid Three Body Problem? Neither do I, but Urschel wrote a 32-page paper on the subject which reads like a foreign language to this blogger.

“High-level math, to me, it really becomes an art form,” Urschel said last fall to the Patriot News. “You have these beautiful results, very clear, very elegant proofs of theories. I guess I’ve always kind of been good at it.”

What else is on Urschel’s resume? “Developed a multilevel algorithm for the fast computation of the Fiedler vector of graph Laplacians” and “Self-directed research to learn relevant aspects of celestial mechanics, dynamical systems, and perturbation theory” are just two bullet points.

Urschel will attempt to pass on some of his genius next semester — albeit in a much more elementary form. Every Monday, Wednesday, and Friday this spring from 9:05-9:55 a.m., Urschel will be instructing a MATH 041 course, which is Trigonometry and Geometry. With the spring semester only days away, the course still has 33 seats open.

If you still need a math gen ed, this could be a really cool opportunity. I managed to get an A in Math 041, so chances are Urschel can do this stuff in his sleep. It’s basically high school level math taught by one of the best true student-athletes in Penn State history.

If any class is worth getting up at 9 a.m. for, it’s probably this one.

Thanks to Matt Krott (@krott16) for the tip.