Penn State: Then And Now In Photos 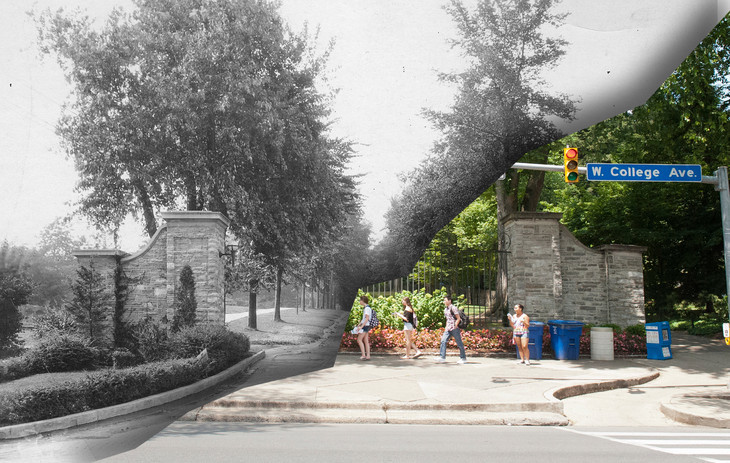 With 160 years of history, Penn State’s campus has undergone some serious changes since it was founded as the Farmers’ High School of Pennsylvania. While the storefronts on College and Beaver might change every couple of years, it is the Penn State campus that has taken so many years to develop into the beautiful place that we know today. To show the tremendous growth Penn State has made over the past century and a half, we took some older images of Penn State and stitched them together with some present day shots. Take a look: While the original photo was undated, it doesn’t lessen the incredible transformation of the fountain near Forum. The Playhouse Theater in the old photo is now known as the School of Theatre, and a new sculpture has been added to the fountain to make it even more beautiful. In each of these two beautiful days from the past and the present, students find themselves sitting at the fountain’s edge to enjoy a beautiful day at Penn State. These Old Main photos date back to 1904, which is known as the “pre-clock era” in the building’s illustrious history. The original Old Main, which at the time was only referred to as the “Main Building,” included classrooms, labs, offices, a chapel, and 400 residential spaces for students. However, this building was deemed structurally unsafe in the 1920s. Thus, the building was leveled in 1929 and rebuilt by 1930, creating the heart of Penn State as we know it today. Old Main’s steps have seen more than enough rallies, protests, and vigils, but still remains as beautiful as the day it was first built. Beaver Stadium, similar to Old Main, has undergone some serious renovations since the founding of Penn State. After moving from Old Main’s lawn in 1893, Beaver Field found its home between what is now Osmond and Frear Laboratories. As seen in the 1900 photograph of players practicing, Beaver Field was much smaller than today’s stadium. It held only about 500 spectators, which is a far cry from the 107,000 that Beaver Stadium can hold today. Because of the sport’s growing popularity, a new Beaver Stadium was completed in 1909. The new stadium fit 30,000 fans, and stood northeast of where Rec Hall stands today. The Beaver Stadium we all know today stands proudly in a different part of campus, as the New Beaver Field was torn down in 1959. Since then, the stadium has only grown. And now, there are talks of even rebuilding the stadium. Maybe we’ll be able to do another one of these photo collages sooner than we thought! As the legend has it, Andrew Carnegie and Charles Schwab, two very competitive businessmen, wanted to each make their own mark on Penn State’s campus. When Schwab’s building was constructed in 1902, it only took Andrew Carnegie a year to follow suit in the construction of his own building. However the actual story is that Carnegie and Schwab were friends, who both invested money into Penn State around the same time period. In the photo from 1883 taken towards the direction of what is now College Ave., kids play with pots and pans as they stand on Old Main’s lawn. Though the students lounging on Old Main lawn nowadays aren’t playing with kitchenware, they’re still taking advantage of the school’s pristine landscapes. To this day, Old Main Lawn is the place to go to spend a beautiful day at Penn State. While buildings on campus come and go, there is one masterpiece that has stood the test of time: Mount Nittany. Though you can’t find any Nittany Lions roaming around these days, Mount Nittany makes for a great Sunday hike. And without it, we wouldn’t have our mascot’s name, which was coined in 1907. Though many students pass this strange looking structure every day, fewer actually care to ponder about its storied past. The Obelisk was built by the School of Mines in 1894 to enable students to study different stones and their weathering qualities over time. This photo was taken in 1929, and the Obelisk, quite understandably, hasn’t changed much since.

Though Penn State has changed a lot since its early days, one thing has never changed. This place is beautiful, not only for its architecture and landscape, but for the memories, knowledge, and joy it creates for its students. That was true then, and it’s true today.

Dana Lipshutz is a senior majoring in Graphic Design who comes from the typical “right outside of Philly” town of Warrington. She overuses the word ‘hooligan’ and likes Harvest Cheddar Sun Chips and raspberry ice tea a bit too much. You can email her at [email protected] or you can follow her @DanaLipshutz however it’s mostly just retweets of Beyoncé gifs/memes.

“When they call my name on graduation day, and I stand up and cross that stage, I know in my heart that this has been a collaborative effort.”

The student alleged Dining hurt students by not providing hazard pay and had a “lack of adequate safety protocols.”

The Big Ten is back, baby.