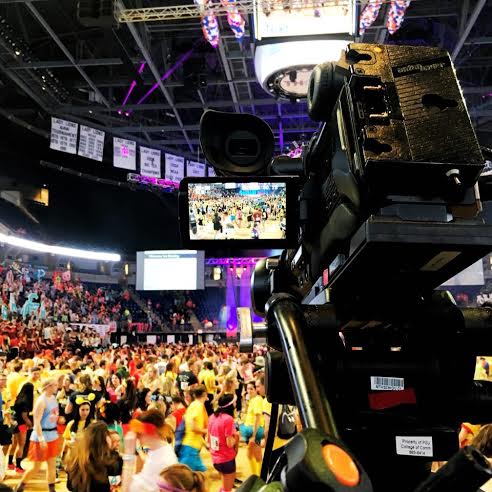 Terrin Hartman is just like any other Penn State student. He loves THON and actively contributes to the philanthropy. This year, however, he wasn’t dancing in the stands like usual. Hartman was busy running the live webcast 46 LIVE from California.

Hailing from San Diego, Hartman knew he wanted to dive into Penn State culture and get involved right away. Before even hearing about the THON webcast, his first taste of THON was through the organization Atlas.

“When I went to the Atlas meeting they had this rock, paper, scissors icebreaker and I won. My prize was a free shirt so I figured, ‘I already have merch, why not join?'” He said, “It was easily one of the best decisions I made at Penn State.”

The 46 LIVE webcast was produced by a previous communications class before being passed on to the Telecommunications club. Once Hartman got wind of the webcast, he knew it was something he wanted to get his hands on. In 2014, Hartman hosted the webcast, giving him ample time on the floor to interact with the Four Diamonds children and to soak in the THON magic.

“It was after my first THON and 46 LIVE experience that I knew this was something really special.” He explained, “I wanted to make this great.”

During Hartman’s time hosting, the webcast was produced by former student Dan Balton. Hartman emphasizes the influence Blaton had on him, as well as the inspiration he gave others. A true leader of 46 LIVE, Blaton played a key role in the webcast’s initial success and production.

“He has so many ambitious ideas that most college students wouldn’t even take the time to attempt, but he wanted the web cast to be great,” Hartman said.

Hartman eagerly wanted to take the reigns of 46 LIVE upon Blaton’s graduation, but knew he had big shoes to fill. Persistent and helpful, Hartman made sure to assist Blaton with anything and everything related to 46 LIVE while he could.

“Anything he needed help with I was there.” He said, “That’s how I really learned what went into making this production happen.”

A broadcast journalism major, Hartman found himself assisting with the new show Monica the Medium here in State College. His impressive work and assistance with the project lead him to follow the show to California, where he is now a production assistant. Though he was far from State College this semester, Hartman’s heart and soul went into THON 2016 nevertheless.

“I thought this broadcast could expose those to THON who have never heard of it. It’s such an inspiring thing and I think the webcast has the chance to inspire those who don’t have a Penn State history or any THON knowledge.”

Though it was tough, Hartman left 46 LIVE in the hands of his teammate Alyssa Gregory. He was comfortable and confident in his friend’s abilities, and the 13 additional producers on the team ensured 46 LIVE documented the weekend successfully.

“Alyssa, unlike me, is great at delegating so before I even left she assigned people jobs and made it so me being gone didn’t hurt 46 LIVE at all.” He said.

During THON weekend, the 46 LIVE team was energetic and ready to take on the 46 hours.The crew had a Groupme chat in which they actively communicated. As he watched and operated from home, Hartman constantly gave out suggestions, comments, and opinions.

“Not a second went by that I didn’t wish I was in the BJC cheering all of them on,” he said, “Though I was in California, I definitely still felt that THON magic.”