Happy Buns officially arrived in Happy Valley over THON weekend, introducing the ice cream-and-donuts combination to the Penn State community. It’s hard to comprehend the amount of sugar in an ice cream sandwich with doughnuts as buns without trying it, but one thing’s for sure: It sounds delicious. While the combination definitely sounds good and looks good on paper, does it pass the all-important taste test?

I didn’t really have any expectations going into the shop. All I knew was I was going to ingest a LOT of sugar as part of this review.

I ordered a glazed donut with one scoop of mint chocolate chip and rainbow sprinkles in between. I could tell right away that the glazing on my donut would stick to the paper, which is a flaw, in my opinion. I appreciate the fact that my fingers weren’t sticky at the end, but I couldn’t eat 100 percent of the doughnut because part of it was stuck to the paper. 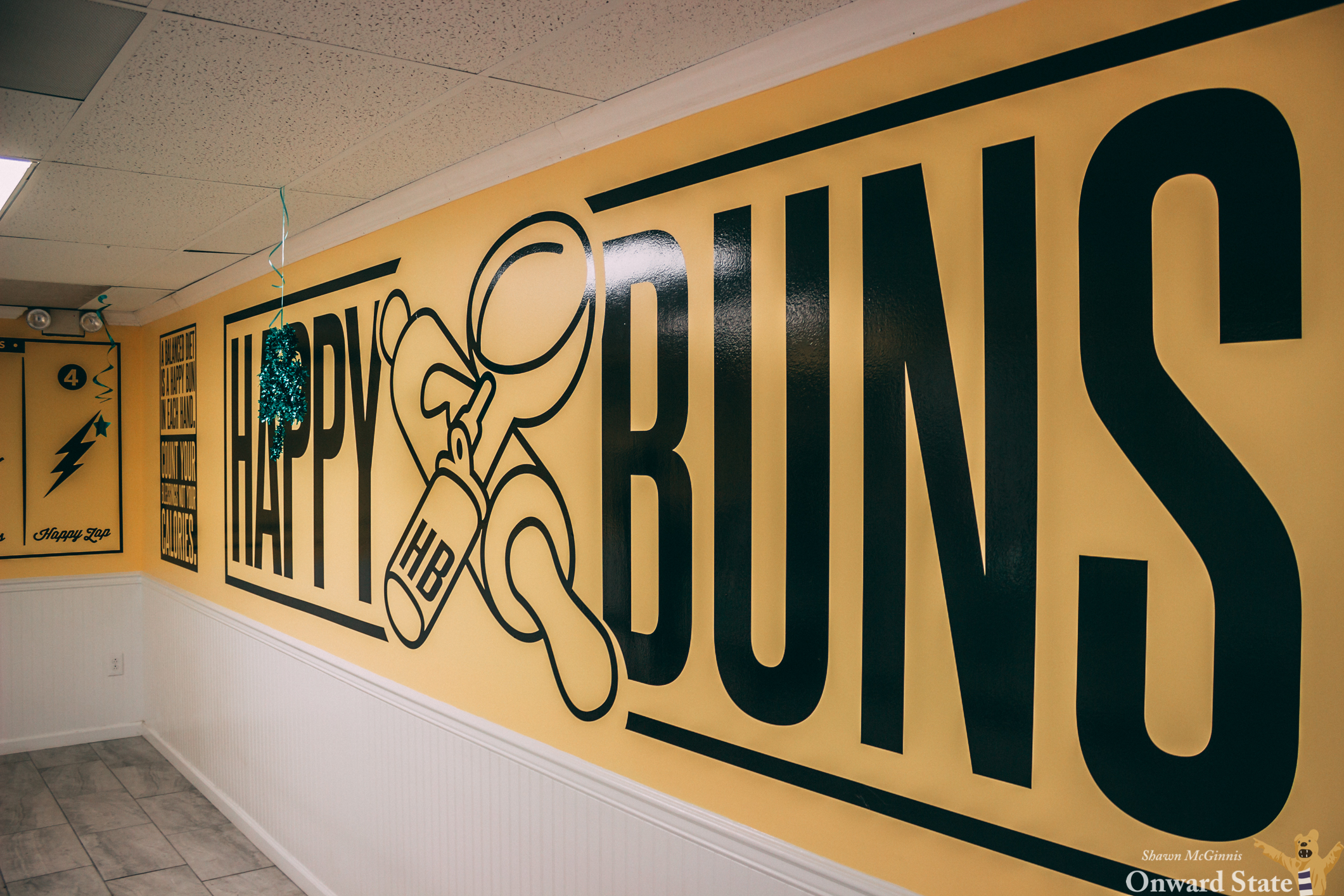 When it comes to food, however, presentation isn’t everything. Taste is, and boy, did my Happy Buns donut taste good. I’m a huge donut guy, so I loved my Happy Bun. The contrast of the hot, fresh-out-of-the-oven donut with the freezing cold mint ice cream was what made my Happy Bun great when all was said and done.

Happy Buns loses points for presentation and its location; it isn’t in a bad spot at all, but it’s almost hidden under Envy, which confused me at first. However, the amazing taste of the food made me a huge fan of the place. Happy Buns could become an elite drunk food option, but its closing time of midnight may hinder this.

The “Donut Kill My Vibe” sign on the front counter tells you everything you need to know about Happy Buns. It makes magic happen by sandwiching ice cream between two halves of a donut. This is first grade math: One awesome thing plus another awesome thing equals a new thing that’s twice as awesome.

First, you choose your happy bun (read: donut). The only options are glazed or unglazed donuts, although I don’t know if they plan to add more variety to the menu at some point in the near future. Without hesitation I chose glazed. Next, it’s time for the ice cream. If you scream for ice cream like every other sane person in the planet (excluding those who are lactose intolerant, in which case, sorry), then you will be pleased by Happy Buns’ flavor varieties. 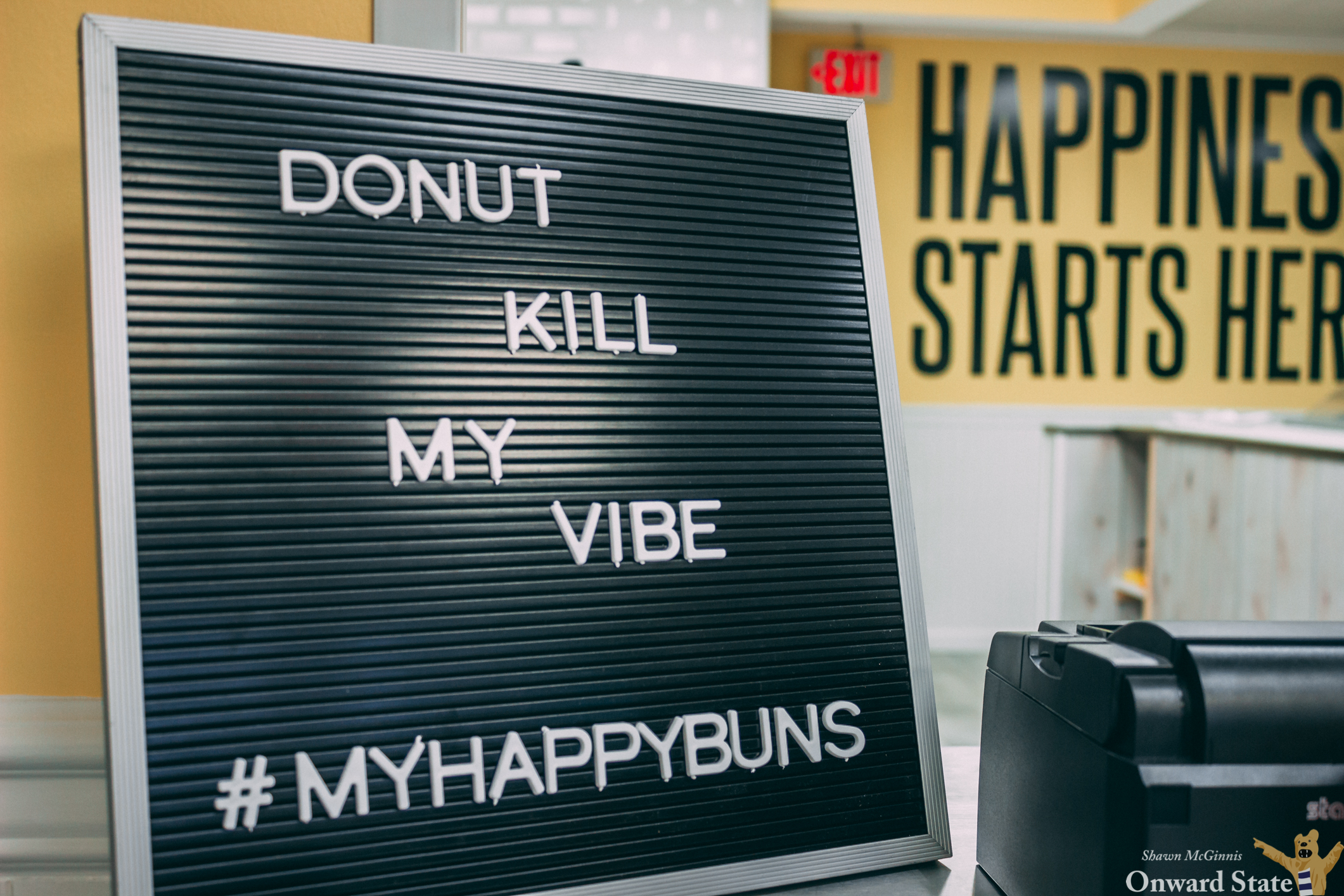 Ultimately, I went with S’mores after thoughtful deliberation between it, Dutch chocolate with marshmallow swirl, and peanut butter chocolate. The last step of the process is the topping. You get one topping for free with your $6 Happy Buns sandwich, so choose wisely. Most of the toppings are pretty standard, but the one that jumped out at me was the pink and white frosted animals cookies. Those cookies are already phenomenal, but as a topping? They’re the pink and white frosted animal cookies on the donut ice cream sandwich. Does that metaphor work?

Overall, Happy Buns was fantastic. The only small sad bun problem was that my glazed donut stuck to the paper more than I would have liked. This caused some minor complications, especially as I reached the end of my donut. However, it’s an easy fix: Just get the unglazed donut!

Like the other Anthony, I opted for the S’mores ice cream. However, I had the foresight to order an unglazed donut.

Not really, I was too tired after THON Sunday night to even know there was even an option of what kind of donut you’d want. My happy bun was finished off with Teddy Grahams, which added a nice crunch to the treat without adding too much more sweetness.

What made the happy bun so intriguing was the contrast between the warm donut and cold ice cream. I ate mine to quick to see if the ice cream would melt quicker than usually, but even if it does, State College’s latest trendy food item won’t be spending too much time in your hand before it’s all gone, anyway.

The concept of a donut ice cream sandwich seems like an often-dreamed of but rarely executed food combination, the kind that makes you turn to your friend on a midnight walk down College Avenue and say, “You know what would be awesome? Fried dough with ice cream inside.”

Happy Buns made that dream a reality, and its customizable variation of the classic ice cream sandwich doesn’t disappoint. The shop’s extensive list of creatively-named flavors, such as Cuppa JoePa and Don’t be Salty, make choosing a filling difficult. The decisions continue at the topping bar, which boasts everything from Cinnamon Toast Crunch to M&M’s. 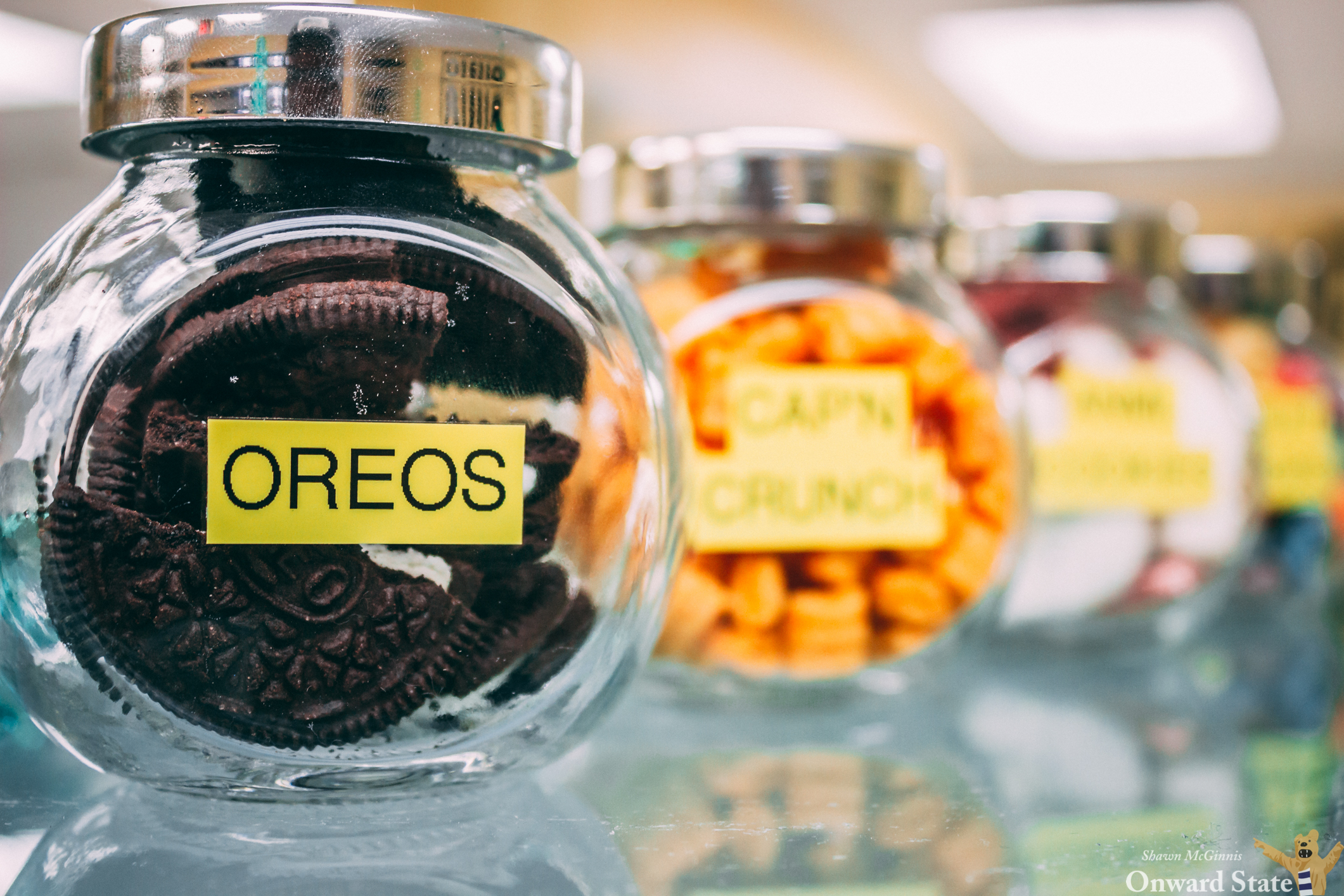 I tried an unglazed donut filled with Rocky’s Road — a combination of Dutch chocolate ice cream, marshmallows and almonds — with Oreo bits as my topping. The warm donut contrasted with the cold ice cream surprised me at first. But after the second bite, it was clear that the dessert was everything I’d hoped it would be, the perfect marriage between the savory fried donut and the sweet and light chocolate ice cream.

The Happy Buns staff are incredibly kind, and ambitious owner Ohm Kongtang said that he plans to add more flavors to his ice cream bar in the future. I will definitely be stopping by again.

I humbly consider myself Onward State’s resident ice cream expert, so as such I was over the moon when I found out Happy Buns was bringing ice cream donuts to State College. At a festival over the summer I had a waffle ice cream sandwich that was out of this world, and I could only hope Happy Buns could come close to that. I wasn’t disappointed.

Coffee ice cream is undeniably my favorite flavor, so I sampled it and opted for the Cuppa JoePa filling in my unglazed Happy Bun. Coffee and donuts is the perfect combination, after all. For my topping, I mixed it up by choosing Fruity Pebbles. This is the breakfast sandwich of my dreams, folks. 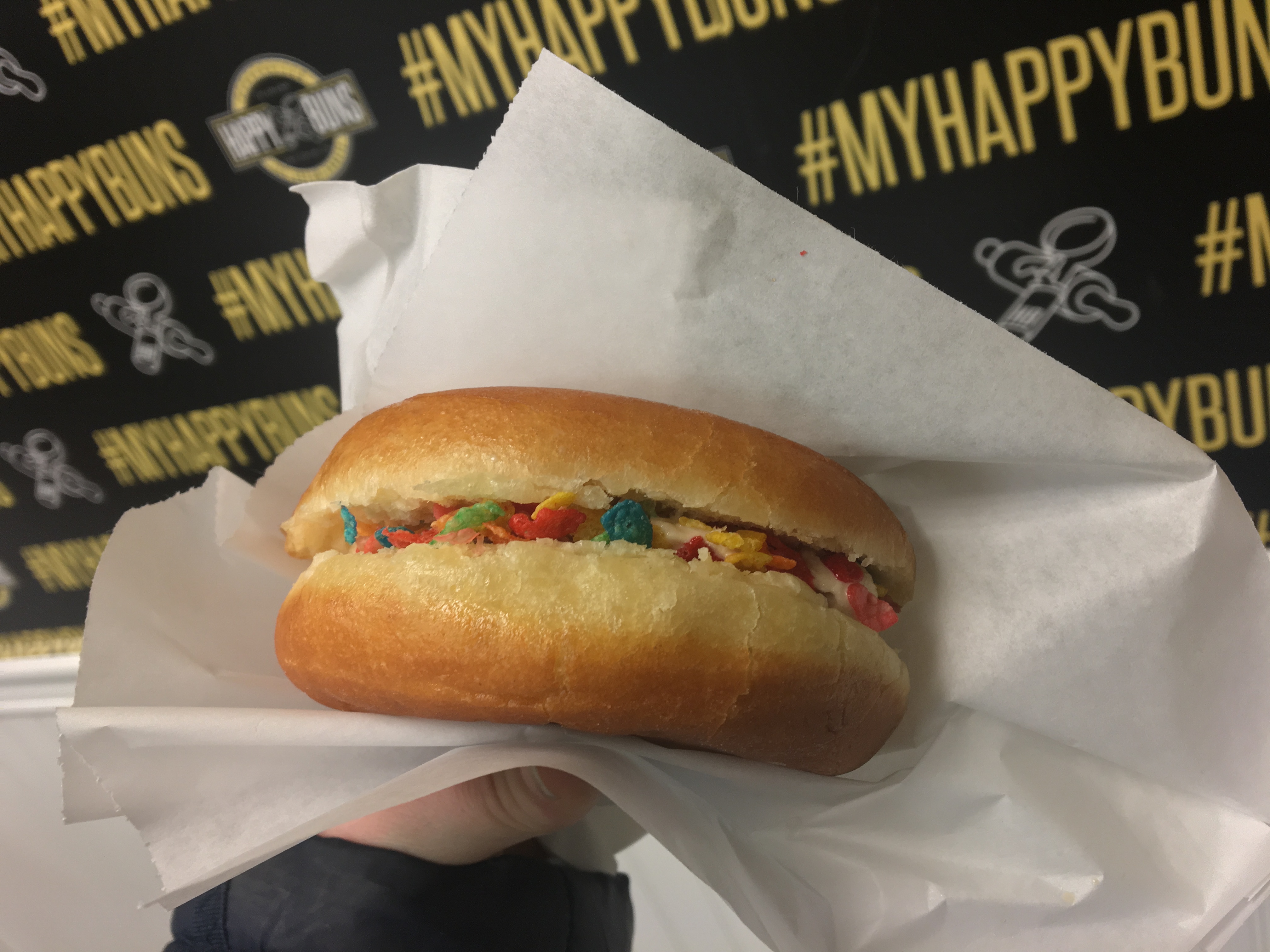 Unlike my colleagues above, I’m a smart ice cream-goer: I actually took a photo of my food before diving in. (Seriously, how many times can I remind these guys to take good photos before taking a bite?) The Fruity Pebbles added just the right amount of crunch to this hot and cold combo, and I finished it off long before it had the chance to start melting. I should probably start looking for housing on the west side of State College so I can try to stop myself from eating so many of these things.