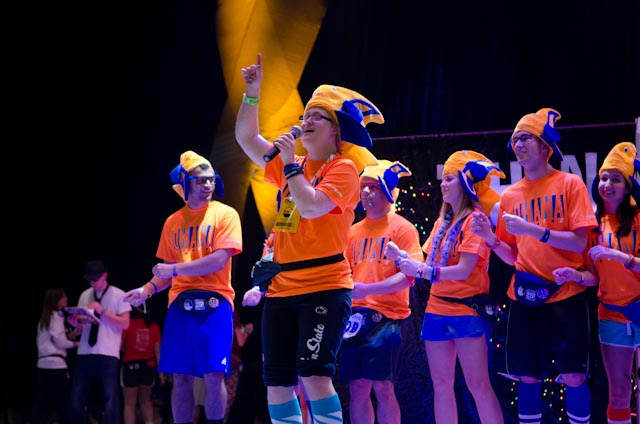 As our bodies began to feel the weight of the 40 hours endured thus far of THON 2012, our spirits relentlessly carried on. With the second half of the “Family Variety Hour” as our second (or third) wind, and with the exciting end now in sight, a new energy hit the floor Sunday morning.

“THON’s Fireworks” began with an eponymous boom as Four Diamonds child Tucker Haas, famous for his 2010 rendition of “Boom Boom Pow” and 2011 return with “The Time”, took the stage. Not only did he knock “Party House Anthem” up a rung to become the most-played song of THON 2012, but his dance moves were also nothing short of inspirational, and nothing less than expected.

Tucker then turned the mic to his sister and fellow 2011 Black-Eyed Peas performer Taylor Haas, who transformed the booming Bryce Jordan Center into a sea of swaying color with her cover of the Miley Cyrus hit, “When I Look at You.”

Jan Stouffer, a music therapist at Penn State Hershey, then lead a group of Four Diamonds Children in a joyful, Four Diamonds remix of “Walking on Sunshine,” a song that truly epitomized the happiness and love pulsing through the BJC.

Next, the Staff of the Penn State’s Children Hospital sang and danced to a THON-themed rendition of the “Hokey Pokey.” References to the encroaching 4:00 finale were a great spirit-booster for all, and skits accompanying the song evidenced the staff’s hard work in preparation for the show.

In memory of all the Four Diamonds children who have lost their battles with pediatric cancer, Ashley and Dani Olstott sang a beautiful rendition of Train’s “When I Look to the Sky.”

Next came a funny, enlightening monologue, recited by Josiah Graybill that put the “Variety” back in “Variety Show” and really helped carry the focus of the room to the stage.

Donovan Cope, in a notorious baseball cap and pair of baggy jeans, sang and danced to LMFAO’s “I’m Sexy And I Know It.” A moraler in a robot costume served as a “hype man,” but Cope’s attitude and stage presence together were the centerpiece of the act. His bold, charming dance moves turned the crowd into a mess of giggles and swoons immediately.

With a precursor shout-out to her Independent THON Organization Ohana, Kaitlyn Good sang a great rendition of Justin Bieber’s “Baby.” Whether Beliebers or not, everyone in the crowd was singing along to Good’s spirited vocals.

Janae Holmes continued the energy with crowd favorite “Dynamite” by Taio Cruz. Holmes’ act was pure dancing fun, and she really just went for it, soaking up the energy in the room and giving it right back.

Siblings Max and Evey Kirby then pumped up the crowd with a true classic, “Livin’ on a Prayer.” Although we were much further into THON than merely “half-way there,” the song provided a genuine support that only Bon Jovi could write, and only the Kirby siblings could portray.

In a tribute to the classics, sisters Katie and Addie McCracken picked up their flute and violin to demonstrate their practiced talent. A throwback to Beethoven’s “Ode to Joy” brought the crowd to a simpler time, and really showed what these kids are capable of.

For the final act, Cora Beyer fearlessly took the stage with a beautiful a cappella rendition of Taylor Swift’s “Speak Now.” With no accompaniment other than the crowd’s cheers and several swaying moralers behind her, Beyer’s talent was truly a showcase.

The second half of the Variety Show was an excellent lead into the last leg of THON 2012. It kept the energy up to speed, and reminded us why we’re all still sitting here after almost two days, cheering, dancing, and never losing hope – FOR THE KIDS.

Ellie Skrzat is a SHC Junior BFA in drawing and painting. Her last name means "gnome" in Polish, which is perfect because that's exactly what Ellie is. A gnome. Ellie performs with Full Ammo Improv.

With finals week only a few weeks away, SRTEs (Student Rating of Teacher Effectiveness) are set to open on December 3rd, which allow you to finally take out your frustrations (or jubilance) on all of your professors in the form of a survey. SRTEs have been around since 1985, and offer the standard questions that help departments evaluate the effectiveness of professors. But maybe they should ask some of these, too, for a more “honest” assessment.