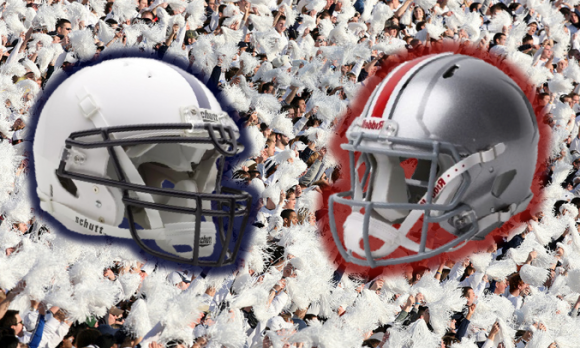 Penn State faces Ohio State Saturday night in a heavily anticipated 8 p.m. showdown at Beaver Stadium. The Nittany Lions (4-2) enter on a two game losing skid, while the No. 13 Buckeyes (5-1) have cruised to four straight victories — a streak in which they’ve scored at least 50 points in each game.

Last year, Ohio State handed Penn State its worse loss in over a century: a 63-14 thumping at the Horseshoe. It won’t be easy for James Franklin’s team to avenge the loss: Urban Meyer has his Buckeyes on a hot streak, led by freshman quarterback J.T. Barrett.

Weather: It should be a windy but sunny fall day, with a high at 56 degrees, and a low at 49 degrees. At kickoff, the temperatures will drop into the forties. You won’t have to worry about rain spoiling your tailgate, but there’s a 25% chance of showers during the game.

Last time they met: Maybe it’s best to not talk about it.

Injuries: Miles Dieffenbach (knee), Adam Breneman (knee), and Ben Kline (Achilles) are all sidelined for the Nittany Lions. Breneman and Kline are out for the year, but Dieffenbach has begun practicing again. The Buckeyes lost star quarterback Braxton Miller before the season began, but replacement J.T. Barrett has been a stud with 17 touchdowns in the last four games.

Ohio State-Penn State: By the Numbers

Pie a Buckeye this Saturday

Shane Conlan to be Honored During Saturday’s Game

History of the White House, A Penn State Spectacle

For Starters, Penn State Football Often Isn’t in a (Field) Position to Win

After Change of Plans OC Donovan Back on Sideline