Mike Gesicki was considered among the top five tight ends for the draft before the past football season began. After his incredible showing at the NFL Scouting Combine, he now is being considered one of the class’s top two tight ends alongside South Dakota State’s Dallas Goedert.

.@PennStateFball TE Mike Gesicki at the #NFLCombine:
Taller than @calvinjohnsonjr.
Stronger than @DPENN70.
Faster than @AB84.
Jumped higher than @OBJ_3.

There’s not much not to love about the Gesicki. After a somewhat shaky early portion of his career plagued by dropped passes, the New Jersey native turned it on during his final two years at Penn State. Gesicki finished his four year career at Penn State with 129 receptions, 1,481 yard, and 15 touchdowns. He has garnered national and Big Ten honors after each of his last two seasons and impressed scouts with his ability to high-point and win 50-50 balls.

The 6’5″ athletic monster provided ample highlights during his time in Happy Valley. From his crazy touchdown catch in the Big Ten Championship game in 2016 to his celebratory leap over Trace McSorley in the White Out, Gesicki has left Penn State fans in awe on many occasions. 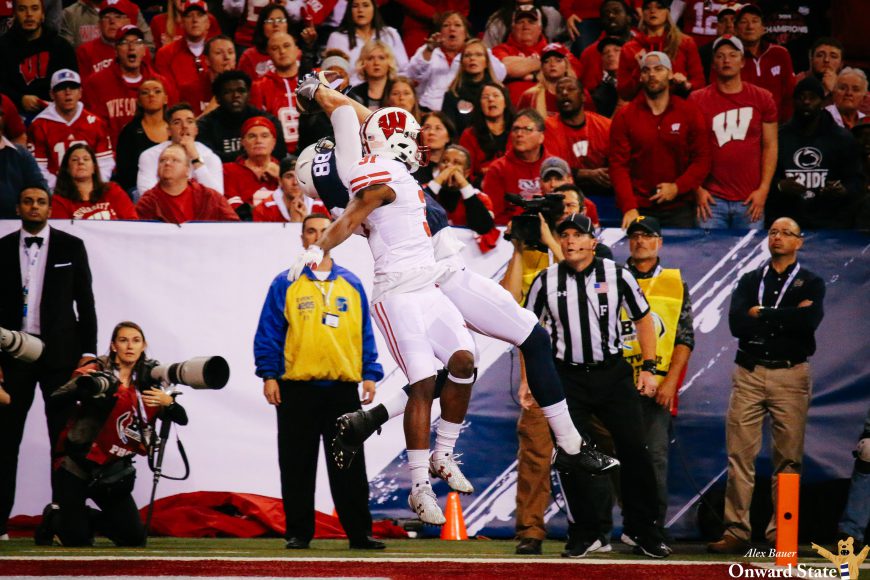 NFL Network’s draft expert Mike Mayock compared Gesicki to Philadelphia Eagles tight end Zach Ertz. Gesicki’s biggest weakness is his blocking ability, but he makes up for it with his 4.54 second 40-yard dash and 41.5 inch vertical. He plays like an additional, well-sized receiver.

Gesicki is a fringe first round pick after his insane Combine numbers, which finished  first in all but one of the tests in his position group. If he does not hear his named call on the first night of the draft, Gesicki will certainly be selected in the second round of the draft.