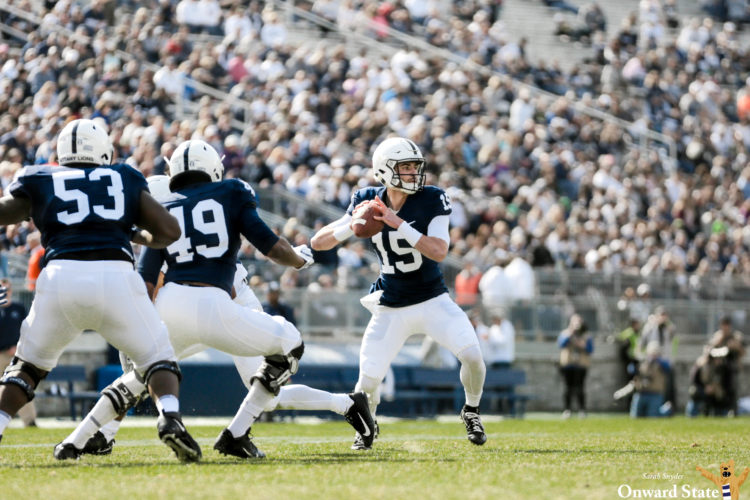 There will likely be plenty more touchdowns scored by No. 9 at Beaver Stadium in the near future.

Roberson has some big shoes to fill when he laces up for the first time and enters the Nittany Lions’ crowded quarterback room. In case you’ve somehow already forgotten, McSorley threw for 9,899 yards and 77 touchdowns, while running for 1,697 yards and 30 touchdowns. He also happened to win a Big Ten Championship and put together a 31-9 record.

The good news for Roberson is he shows some striking similarities to the program’s all-time leading passer. At 5’11”, 190 lbs., Roberson is an undersized yet dangerous dual-threat quarterback, much like McSorley. During his junior and senior seasons at DePaul Catholic in New Jersey, Roberson threw for 4,898 yards and 59 touchdowns and ran for 887 yards and three touchdowns.

After a likely redshirt year next season, he’ll be part of some stiff quarterback competition with Sean Clifford and fellow four-start incoming recruit Michael Johnson. The initial spring roster indicated Johnson will wear No. 13.

Other freshmen sporting notable numbers include cornerback Keaton Ellis, who will rock Marcus Allen’s No. 2, and linebacker Brandon Smith, who will hope to redefine the legacy of No. 12, a number previously made great by quarterbacks Kerry Collins and Michael Robinson.

The rest of the freshman class’s numbers include:

Share via
Freshman Quarterback Ta\'Quan Roberson To Wear Trace McSorley\'s No. 9
https://onwardstate.com/2019/03/13/freshman-quarterback-taquan-roberson-to-wear-trace-mcsorleys-no-9/
Follow @onwardstate
Send this to a friend