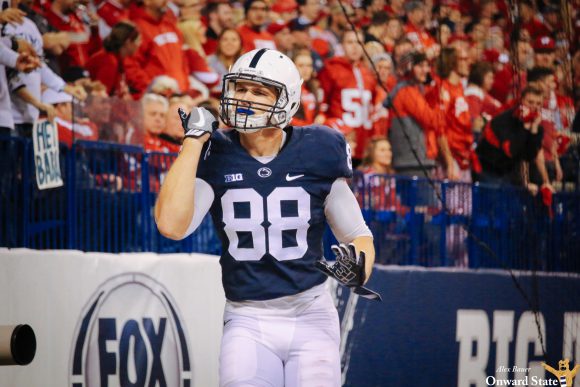 Mike Gesicki’s end-of-season surge marked a turning point in the second-year tight end’s career and one of the few bright spots for the Miami Dolphins this season. It also boded well for THON — and not just because of his FTK cleats during the #MyCauseMyCleats campaign.

One fantasy football player Andrew Heim won his league in part thanks to Gesicki’s six receptions, 82 yards, and two touchdown last weekend — a clip worth 26.2 points in PPR leagues. The following week, Gesicki scored a game-winning touchdown that helped the Dolphins knock off the New England Patriots. The game cost the Patriots a first-round bye in the NFL Playoffs, which was awarded to Heim’s Kansas City Chiefs, instead.

To express his gratitude for Gesicki, Heim tweeted at him Sunday night, asking what charity he supports, so he could donate to it.

Gesicki quickly responded by tagging THON, to which Heim later replied with a message of confirmation from DonorDrive.

Aside from the football team’s involvement during the pep rally, Gesicki has long been linked to THON, dating back to his playing days in Happy Valley. He befriended THON child Landon Knepp in 2017 and the two have remained close ever since, as Knepp’s family highlighted during Family Hour in 2018. Gesicki even made a surprise appearance at THON 2019.

Gesicki’s Week 17 performance ended what’s amounted to somewhat of a breakout season for him. After not scoring a touchdown during his first 24 games, Gesicki scored five during the final six weeks of the season.

Share via
Fantasy Football Champion, Chiefs Fan Donates To THON In Honor Of Mike Gesicki
https://onwardstate.com/2019/12/30/fantasy-football-champion-donates-to-thon-in-honor-of-mike-gesicki/
Follow @onwardstate
Send this to a friend