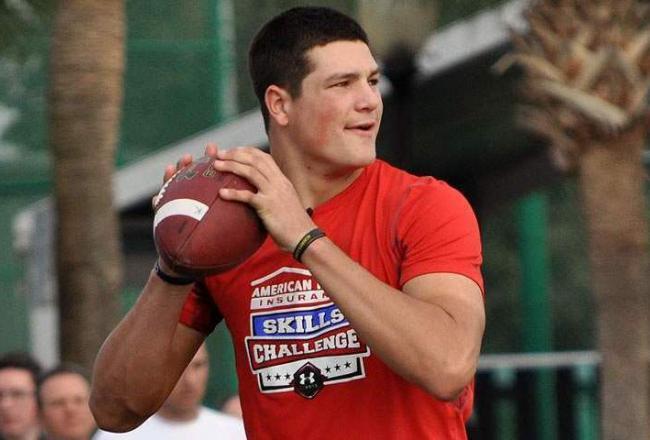 Meet Christian Hackenberg, senior quarterback at Fork Union Military Academy who verbally committed to Penn State on February 29th, 2012 over schools like Alabama, Miami, Connecticut, and Virginia. Recruited by Charles London, Hackenberg is rated number 7 in 247 Sports’ Top 247, number 15 in ESPN150‘s, number 24 in the Rivals 100,  and is rated the best quarterback in the country by ESPN and 247 Sports. Hackenberg is expected to officially sign his national letter of intent to play for the Nittany Lions in February.

Penn State’s prized recruit spoke to us over the phone about his dating life and dinosaurs.

Onward State: When did you truly realize Penn State was your number one and what made you pass up other schools?

Christian Hackenberg: I realized after junior day that I just felt right at home at Penn State. I loved the guys. I would say it was a pretty easy decision and that I fell in love with the total package.

OS: How would you describe your friendship with Adam Breneman?

CH: It started around the same time as junior day, maybe a couple weeks before. It just became stronger and stronger and we went through a lot with each other.

OS: Did Bill O’Brien say anything to you before, during, or after the NFL rumors were swirling?

CH: Yes he did. He talked with Adam and I and told us to trust him and that he wasn’t going anywhere.

OS: What was your first impression of Coach O’Brien and what made him the coach you want to play for?

CH: He was very down to earth but still had the same knowledge base as all the other coaches. He was also a very honest guy throughout the whole process.

OS: What do you anticipate will be the biggest challenge for you when transitioning from high school to college?

CH: I was at the Under Armour game and I realized the difference in the speed of the game. It’s definitely a step or two faster in the Big Ten.

OS: What are some of your academic goals at Penn State? What do you plan to major in?

CH: To stay in this routine and keep working hard. I was thinking either Communications or Business.

OS: Are there any similarities between your high school offense and what Bill O’Brien runs?

CH: They are similar but much more advanced. In both we’re always spreading the ball around.

OS: Did you grow up as a Penn State fan as a kid? What do you remember from the games?

CH: When I was younger I didn’t really have “a team.” But, I do remember my first college football game at Penn State with all the huge crowds. I still have a vivid image of how big the stadium was.

OS: For all the girls out there wondering, are you single?

OS: As it being an OS tradition I have to ask you: if you were a dinosaur which one would you be and why?

CH: Velociraptor so I could run fast at least once in my life.

5 Excuses to Visit State This Summer

It’s almost time to head back home and slave away with your recently landed internship or lousy paying busboy job, but don’t fret. If you live close enough to Happy Valley to journey back for a good time, here are the five events you should not miss out on.