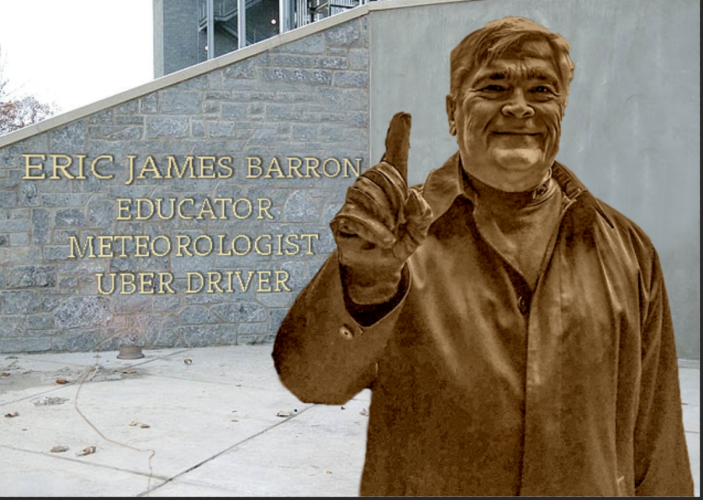 Florida State recently unveiled a statue of former President Eric Barron, and with the current, noticeable lack of metallic enshrinements of university figures on Penn State’s campus, we couldn’t help but feel a little left out. After all, he’s our CURRENT university president. What do we get?

If Penn State is considering ever building a statue in Barron’s honor — although I’m unsure if this university will ever be in the business of doing so again — we have a few suggestions.

This statue will honor Eric Barron as a man of the people, standing among his subjects to perform the very 2017 thing of watching the solar eclipse.

Additionally, it will ensure President Barron, in some form, will always see the banners flying overhead and relaying important messages to him before every Penn State football home game.

I’ve never seen one in person, but I imagine that outside of Beaver Stadium would be the perfect location for a statue that stands proudly with one finger signaling how many flavors you can order in a cone at the Creamery. We won’t know for sure until we try it out though.

Remember when Eric Barron talked about your “blue sports car” at Freshman Convocation? With this statue, you can actually sit in a blue sports car with Bronze Barron– which is fitting considering the only times many students see him is at Convocation and in the annual holiday greetings (Editor’s note: Check under the seat for a surprise cowbell.).

While we’re talking about statues to honor a Barron, why stop at Eric? Let’s get cultural icon Molly in there too and make the perfect photo op with Penn State’s First Family.